I know, three Gatibu posts in the last three weeks might be a bit over the top, but they did release a new video clip today and besides, I got my Christmas present ahead of schedule this year, when I open the mail today and an autographed copy of their CD came out of the envelope. After listening to all songs several times, I must say “Biarritz” is my favorite. Gatibu is not only a band made up of talented guys, but they know how to treat their fans.

After announcing their single “Bixotza Suten” last month, Gatibu put their latest album “Zazpi kantoietan” up for sale during Durango’s Basque Books and Music Fair last weekend. It was the best-selling album with 3000 copies sold and, to celebrate, the band released today the videoclip “Bixotza Suten”. 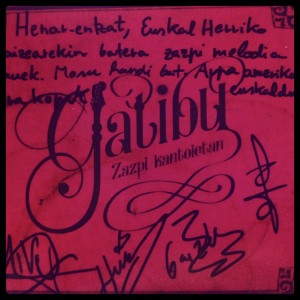