Last Saturday, the Basque Center in New York became a dance club, where hundreds of people gathered to celebrate the Euskal Etxea’s first Gayaldi: A Dance Party Celebrating Everything Basque and Queer. Men and women arrived to the Greenpoint neighborhood in Brooklyn to participate in this historic event, the first one of its kind in the almost 100 year history of the Center. DJ Ron Like Hell and go-go boys Rowan and David kept the the party going all night long. 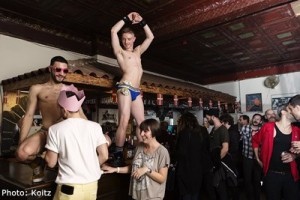 The idea of celebrating a gay party had been some years in the making. In 2005, Luis “Koitz” Foncillas, then president of the New York Euskal Etxea, talked with the San Francisco Basque Cultural Center president, Xabier Berrueta, about planning a gay event. Although Xabier is not gay, he thought it was a wonderful idea. However, the plan never got off the ground.

After other gay members joined New York’s Basque Center, such as Imanol Botxo and Aitzol Azurtza, the idea resurfaced and, together with Patxi Olabe, a long-time member of the Euskal Etxea, they decided to organize the first Gayaldi. Members hope it will become part of the center’s annual activities.

New York’s is the first Basque Club in the country to dedicate a day to gays and lesbians. The organizers hope that other Basque Centers will follow suit and add similar activities to include everybody.

In other news, Boise’s OPC Movies will show a free Christmas movie this year for the entire family, Christmas With a Capital C. It turns out I was mistaken and “C” stands for “Christian”, not “Crap”.