I’ve always had a hard time understanding the US obsession with germs.

Ironically, my own 9-year old son might possibly be the biggest freak when it comes to having clean hands. I once caught him holding his weenie with toilet paper to avoid contact while he peed. I was like, “Dude, aren’t you being just a tiny bit too careful?” He pointed out we had ran out of soap in the bathroom. 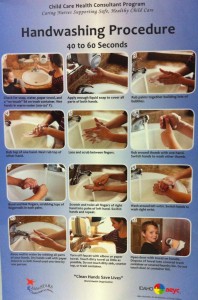 The kids and I were in the Basque Country this summer visiting my family and decided to spend some time in Santurtzi during the town’s festivities. Port-a-potties over there do not come standard with hand sanitizer, but my kid didn’t notice until he finished his business (sans toilet paper this time) and almost had a heart-attack when he realized the closest sink was in some bar 10 minutes away. Of course I didn’t take him when he whined about washing his hands. Instead, I told him that, shocking as it may seem, all his fingers would still be there in the morning. This happened a few months back and they have yet to detach from his hand. You know, I can be right once in a while.

Today, I went to pick up my kids from the Wings Center after work. I left H-P in a bit of a hurry, so I run to the bathroom while they put on their coats and got their lunch-boxes from the cubby. As I was getting ready to wash my hands, I looked to the left and had an epiphany. The mystery to sanitizing obsession was finally revealed. Taped to the wall there was a poster with instructions for proper hand-washing, a whooping 12-step procedure with accompanying photos to illustrate the process.