This year, Boise’s Anduiza Fronton building will celebrate its 100th anniversary, not a small feat when you consider the city is only 150 years old. 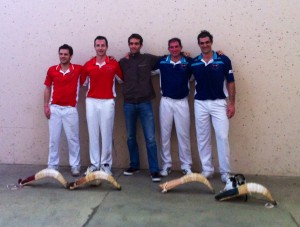 The Kapito Harri team, reigning champions of Euskadi and France, played an exhibition game of Joko Garbi (clean game) last night for members and friends, and what a great turnout that was. I don’t remember seeing the fronton that crowded, not even during the Pala Championship last summer for San Inazio. The blue team, made up by Bruno Irachabal and David Navailles won over the red team, Pantxo Lisar and Eneko Sarratia, during an hour-long game that ended 40-36.

It was fun and such a great way to kick off the anniversary celebrations, which I will share with you as soon as I have more information. For now, I’ve heard talks of a pala instructor coming from the Basque Country in July, plus NABO Pala Tournament will be held in Boise this year during the San Inazio weekend in July.

You can follow this link to watch the 2012 pilota final between “Kapito Harri 1″ and “Hardoytarrak” in its entirety to get a better idea on how the game is played.

If you would like to read more about Boise’s fronton, feel free to browse through the articles placed below the video and a link to yesterday’s pictures.