He was the player who competed the longest in Fort Pierce Jai Alai, Florida

FORUA. Death won over life in the last minute of Gustavo Gandarias’ game, 51 year-old former Jai Alai player, who passed away on Monday at Basurto’s hospital in Bilbao, as a result of a brain hemorrhage. This Jai Alai player from Forua spent the most time playing at the Fort Pierce Jai Alai court in Florida, where he remained from 1980 until 2003. His long stay got him a plaque from the Mayor of the city. Players from that time say that the Mayor, jokingly, proposed to change the name of the city from Fort Pierce to Fort Gandar, such was the popularity of the Biscayan player. 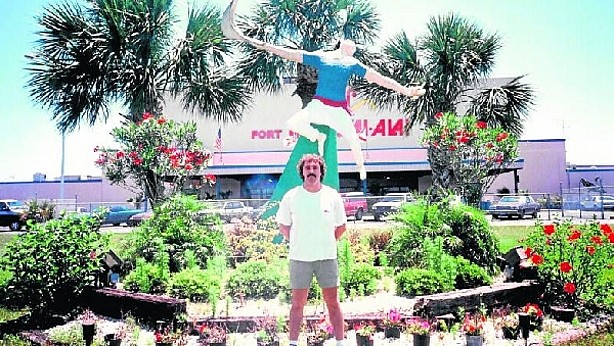 Besides, Gandar played in the Mallorca’s Balear de Palma and Benidorm’s Eder Jai before leaving for the United States. Once in Northamerican territory, Forua’s back player competed in Harford, in 1980; in Ocala, in 1984 and from 1997 to 2001.

His familly, friends and colleagues from the different courts said goodbye on Tuesday during a funeral celebrated in his memory in Forua’s parish, at 6:00 PM.

Gustavo Gandarias, who played as Gandar with number 33 on the back at Fort Pierce Jai Alaia, was a very well-known player in the Northamerican pilota courts of Florida and Connecticut.

He lived his glory years between 1981 and 1988. During that decade, he obtained second place in the total quinielas (a betting version of the game) from Quincy Jai Alai in Connecticut (in 1981-1982), as well as champion in quiniela 12 and back players at that same court (1982-1983). In 1985, he got second place of back players in double quinielas and champion of quiniela 12 in Fort Pierce, a court that expressed its sorrow for Gandar’s death by placing a crape in their website for the last few days.

The Forua native was also champion in back player double quinielas and quiniela 13 in 1987 at the Fort Pierce Jai Alai. For him it was an honor to represent the court he knew better than anybody in the World Jai Alai of Champions in 1988. Four years later, he played at the Bristford in Connecticut with Txurruka as manager, although he would end up returning to Fort Pierce.

Gandarias was born on June 7, 1961 in Forua and studied in the Gernika-Lumo Institute. He celebrated his professional debut on December of 1978 at the Gernika Jai Alai and for two years he took part in competitions there, in Durango or Markina.

In his journey through the United States, along with games in the Basque Country, he worked in the Hartford, Ocala, Quincy and Fort Pierce pala courts. Gandar also experienced the Ijapa strike (1988) and belonged to the Xistera cooperative of  players (1992).

“GOOD AND HAPPY” Both his brother Pantxoa and his good friend José Mari Bernedo, Pitxi, define him as a “happy, vivacious, funny guy, who was always looking for the joke,” and his mother said that he “was very good, a very good person,” overwhelmed by her recent loss. Pitxi and Pantxoa added that Gandar was “everybody’s friend, very warm.”

His game as Jai Alai player in the court was good: “He was particularly good from the right, he had a good right, but he had a hard time with the backhand,” commented Pitxi, one of his closest friends. Newspapers from the early 80’s remember his year as one of the best in the Gernika Jai Alai school. “At barely 18 years of age they will cross the Atlantic to the United States”, went down in history and in those clippings saved by Gandarias’ family there are quotes from Naparra, Arazosa, Gandar, Asolo, Rafa Irusta, Mikel Gondra, Carlos Arrasate II or Rementeria, among others

Gustavo worked in the United States for a company that made Formica kitchens and upon his return to the Basque Country four years ago he worked on temporary basis in Panaderías Labakoa of Gernika-Lumo, as well as deliveryman for hospitality establishments.

Original article in Spanish published by Basque newspaper Deia. I apologize for any errors I might have made in the translation.