A documentary filled with action, excitement, and tension, which tells about the running of the bulls in Pamplona from the point of view of the runners. The film, listed for the Goya Awards of 2013 in 8 categories, will be in theaters on June 21.

‘Encierro’ is an spectacular feature-length documentary narrates the running of the bulls from the viewpoint of the runners who take part in the annual event in Pamplona during the fiestas of San Fermín (from the 7th to the 14th of July). 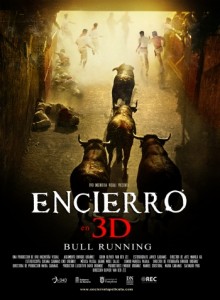 The film takes us to the streets of Pamplona, before a group of 1300-lbs bulls, with Miguel Ángel, Paco, Miguel, Joe and Noel, five fanatics of the running of the bulls and who allow us an intimate look at what it means to them to run in the event as they share their reasons, their fears and their experiences.

A documentary full of action and emotion, filled with tension but also of beauty, with a spectacular narrative sequence and some images never before captured and all provided by the latest cameras of High Velocity 3D. A special camera was also used which was hung at a height of 270 meters across the center of Estafeta Street as it filmed the bulls and runners below. In order to transmit the spectacular images in the most impressive manner possible, the film was shot in 3D stereoscope, which proved to be a technological challenge for the cameramen.

In addition, due to the fact that the running only happens over eight days annually and the difficulties presented by the 3D technology, the shooting was carried out over the years 2009, 2010, 2011 y 2012.