I’m sorry for the late notice, I don’t know what I was thinking! But if you were looking for something to do this afternoon, here’s a great idea.

After nearly 3 months of games in the league, and three or four weeks playing the tournament, the baleen and pala finals will take place today, Saturday 11 at 1:00 PM, right before the start of Mother’s Day dinner, the last Euzkaldunak dinner until the fall.

Women’s B League will kick off the competition, followed by Men’s B League, Women’s A League and Men’s A League. These will be exciting games (two of them 2 vs. 1!), so come check them out. Bring friends, drinks, snacks, whatever you would like!

The fronton is located in the basement of the old Anduiza Hotel at 619 Grove Street in Boise, Idaho.

In the B League Finals for Women’s Baleen:
Kodi/Carianne will take on Kristina (her partner can’t make it)

In the B League Finals for Men’s Pala:
Esther/Juan vs. Rich/Pedro (the number one team Jerry/Mike unfortunately had a scheduling conflict)

In the A League Finals for Women’s Baleen:
Esther/Miren will take on Anne-Marie (her partner is gone as well)

In the A League Finals for Men’s Pala:
Sarria/Schaffner (they have to win 2 games to win the championship) vs. Boyd/Sangroniz 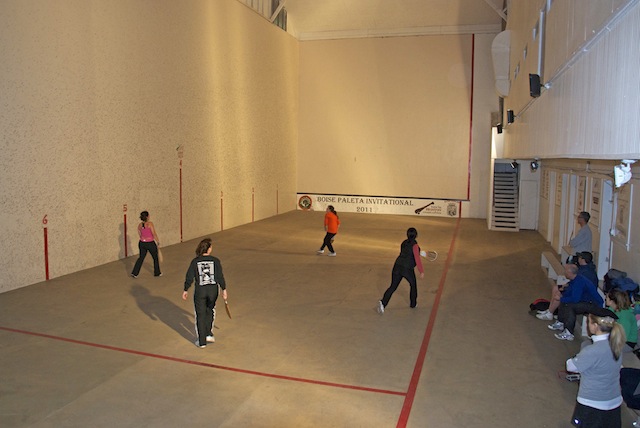 One thought on “Baleen and pala finals today at 1:00 pm at Boise’s fronton”