Thanks to a message from my friend Olatz Amarika, who you might remember from previous posts on cultural exchanges between Basque Country and the US, I came across one of the best sounding rock bands I’ve heard in a while, Buffalo Clover. The band is based out of Nashville, with a touch of Basque, thanks to Amaia Agirre, who plays the keys. 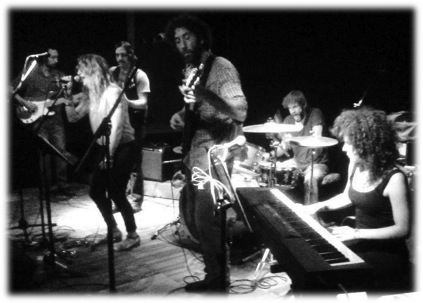 Amaia, a former student in Olatz’s English Academy Ikasgela, is a 24 year old girl from Larrabetzu, a little town in the province of Bizkaia. She moved to Nashville in 2011 after finishing her Bachelor’s Degree in Education in order to learn music, English, and continue with her academic and personal formation in the educational field.

It wasn’t an easy move for Amaia. She recalls struggling with the English language and having to depend on sentences she’d written in her little traveling notebook: “I’m sorry, I got lost. Could you help me, please?”. Luckily, she had family ties in the US that made the transition more manageable. One of her uncles left Gernika for Miami when he was young to play Jai Alai, and ended up living there permanently. Amaia also has a cousin in Nashville, so she decided to make of that city her starting point for learning a new culture and a new language. As it usually happens when you live abroad, the US in general and Nashville in particular have given Amaia a different lens to see the world, not to mention an opportunity to expand her music knowledge. She is in Nashville after all. They don’t call it the “Music City” for nothing!

Apart from playing in the band, Amaia is a Lead Teacher at El Jardín de los Niños, a preschool focused on teaching Spanish. She also volunteers at the Montessori East preschool and Kindergarten as Spanish instructor.

Buffalo Clover recently struck out on their own as an independent band, with no label or middle-man. On the flip side, all the costs of releasing a quality record now fall directly on their musical shoulders. The band is raising funds for mastering, album art, vinyl and CD pressing, distribution, promotion, and all the other costs that go along with releasing a record. They sold a car to release our last record, and recently joined Kickstarter, an online platform to raise money directly from the fans in exchange for cool rewards from the band.

Amaia is extremely excited about the upcoming record of Buffalo Clover and their summer tour, which will include the US (New York City, California, etc.), England, Spain and the Basque Country in the summer.

So hurry up and visit the band’s Kickstarter website to meet the members, listen to their music, and make your pledge. Time is running out, so don’t procrastinate!

One thought on “Buffalo Clover: A roots-rock and soul band from Nashville, with a touch of Basque”