One more year, members of the Rhode Island Basque Club gathered last weekend for ‘Txitxiburduntzi‘, a Basque ritual celebrated on the Sunday before Ash Wednesday. 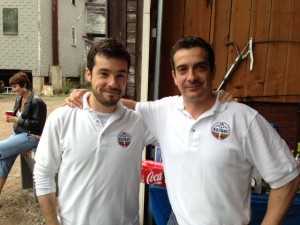 Roberto Guerenabarrena, president of the Rhode Island Basque Club, explains how on that Sunday, friends in the Basque Country would go to the mountains and enjoy all the products from a fresh pig. Even though Lent Season is long past, Riki Lasa -president of the Pelotari’s Union- has been organizing this event in May for many years now at his home in Connecticut.

The main event was a challenge of aizkolaris (wood cutters), where three new challengers set out to defeat the current champion Riki Lasa, and one of them did! The new champion is Juan Mari Aramendi, aka Troitixe.

Here you have the pictures from the event. Enjoy!