Moving sucks. There is really no other way to put it. Whether we’re talking about going from one house to another within city limits or across the country, the amount of suckiness involved is pretty much the same. You still have to take all your crap out of the drawers, cupboards and closets, cram it into boxes, and haul it to the new pad. Somehow it even seems more of a bother when your new house is only ten minutes away. Is it really worth the effort just to drive a few miles down the road? Instead of taking the time to pack everything carefully, I think I’m praising myself when I say I am doing a half-ass job. 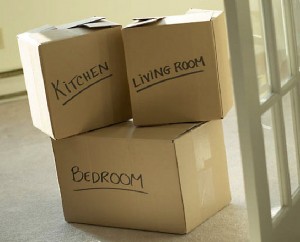 I took a couple of hours on Monday to slowly sort things out in the garage. I already had a bunch of boxes piled up along the walls to allow for parking, but I decided to leave the car outside for a few days and use all the space for the moving boxes and small pieces of furniture. Initially, my idea was to go through each box and get rid of whatever I haven’t used for at least one year, but do you know how much time and effort is involved in that? I was able to form a give-away pile big enough to fill the back of my car, but mainly I managed to rearrange the boxes from the sides to the middle of the garage in a more compact manner by making it real life Tetris. I mastered the game at 15 during those long hours inside the Rainbow, Ortuella’s most popular bar that summer. Even people from neighboring towns would come over on Friday nights to party. An isolated phenomenon that was never to be repeated again.

However, as much as I hate the physical effort that moving requires, I find dealing with the emotional jolts from ghosts of lives past even more challenging. I came across a picture of myself from 1998, only two years into my American adventure. I know I’ve aged since then, I’m not blind, but I always thought I hadn’t changed that much. I’m not one to worry in excess about the passing of time, as I’ve enjoyed every stage of my life so far, with its ups and downs, its advantages and disadvantages. However, finding that Youth Card was like a punch to my stomach. I kept looking at it, wondering what the hell happened to the glow of my skin and when exactly did I get all the dark spots on my cheeks.

I had barely recouped from the shocking discovery of my old age when I pulled a postcard from the bottom of another box. There was an Athletic player with his arm over the shoulder of a player from Real Sociedad. I turned it around and started reading the Happy Birthday message written on it. I knew I should have recognized the author by the handwriting alone way before I got to the signature, but the friendliness of the letter caught me off guard. I forgot there was a time in my life when I actually gave a shit about the sender. I debated briefly whether to keep it or place it in the recycle bin, but you don’t throw away birthday cards. Besides, it was the perfect reminder of just how volatile everything is. Carpe Diem. I put the card back in its box and went on to rummage through the memories inside the next one.

2 thoughts on “It’s not called moving for nothing”