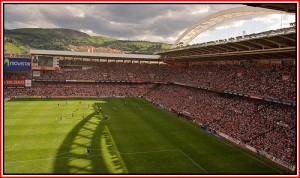 I can count on two hands the times I saw Athletic play in San Mames. I left the Basque Country at 21, and other than tutoring a couple of kids here and there, I never held a job or had any money until I moved to Boise. I couldn’t afford to buy season tickets, plus I lacked initiative to figure out how to get supplemental income until a few years ago. Now, I won’t be able to set foot in La Catedral ever again. Demolition work started yesterday on this iconic structure, which would have turned 100 years old in August. Even the famous arch will come down. I hope they are able to salvage it and place it somewhere as a historic piece.

On January 20th, 1913, the foundation stone was laid on San Mames Stadium, home to my soccer team, Athletic de Bilbao. The oldest built stadium in Spain with capacity for about 40,000 people, it was nicknamed La Catedral because the field was was built near a church called San Mames, who was an early Christian thrown to the lions by the Romans. For that reason too, Athletic players are known as Los Leones (The Lions).

Not being a regular spectator doesn’t mean I loved the stadium less than long-time season ticket holders. You only have to experience the crowds on game day once to feel how devoted and loyal Athletic fans are to their team, both inside and outside the soccer field. Licenciado Pozas street becomes red and white as fans gather for a drink in the bars a few hours before the game starts. At least that will remain the same after construction ends in San Mames Barria.

On Wednesday, a team of soccer players from Biscay took on Athletic in an emotional game to say goodbye to San Mames. Throughout the day, I kept looking at pictures posted on Facebook by my friends while reading about the event on the accompanying comments. Sadness all around. Today, I took some time to browse through the videos on YouTube and newspaper clips from different media outlets. I was alone in my cubicle at work, in silence, and still became emotional to the point of shedding a couple of tears, which I quickly wiped before a coworker saw me and I had to explain why I was crying. I can’t even imagine how the people felt there, surrounded by thousands of other fans who, like them, choked up a bit when soccer legends such as Dani, Andrinua or famous goalie Iribar took the field once again, after being retired for so many years.

I feel wistful about losing San Mames, but I look forward to seeing the new stadium rise. I can’t wait to celebrate a season win and take out the Gabarra once again. In the meantime, I am happy that my son had a chance to watch a game in La Catedral before it was too late, and last summer he met Iribar in Lezama (Athletic training grounds), and wouldn’t wash his arm for weeks in an effort to keep his signature from fading away.