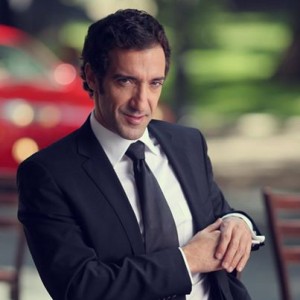 That changed about a week ago, after I reluctantly let another friend program 106.3 Latino in my car. It was the least I could do after she single-handedly moved 85% of my crap from the old house to the new one. I never found a Spanish radio station I could stomach, but this one is a little different. They play Maná, Pitbull, Shakira, and I keep texting her when Alejandro Sanz comes on the air to tell her, for the hundredth time, how cool it is to hear a Spanish accent on a US radio station.

The drawback of listening to the radio is having to put up with the never ending strings of commercials. Advertisements in Spanish are specially annoying. I hate it when the guy is going on and on about some shit you can buy for your father at the Home Depot, in perfect Mexican Spanish, but come time to list the power tool brands, he totally switches to English. It completely throws me off. Then, the Allstate commercial came along. I sensed a difference, but I couldn’t put my finger on it. Then, he pronounced a word where the “z” actually sounded like a “z” instead of an “s”. OMG! He’s from Spain. This radio station is getting better by the minute.

By the end of the commercial though, I was pissed. It turns out the Spanish voice is “Bad Luck” in the ad-campaign by the Allstate insurance company. Well, isn’t that insulting? I thought. At least he looks elegant, with his smart black suit and polished shoes. However, after a few minutes of investigation on Google, I came upon an article that claimed the accent was chosen to infuse a sense of sophistication into the “Bad Luck” character. Ok, that’s more like it. I guess if they wanted to project arrogance and self-importance they would have chosen someone from Argentina.