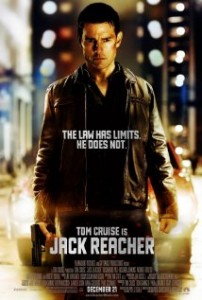 A few days ago I was toying with the idea of becoming an American. After last night, I feel like my blue passport should arrive anytime now.

It rained all day yesterday. Not like it matters while I am at work —there are no seasons in my cubicle at HP— but the bad weather puts a cramp on your style when you want to show your guests a good time in Boise. Luckily, this particular friend arrived from the Basque Country on Friday so he probably feels at home amid gray skies, rain, and lack of sun.

We went for a drink first, then decided to turn in early and watch a movie. It’s really hard for me to talk about this horrible experience so soon after it happened, but I am going to try. We opted for ‘Jack Reacher’, even though I took a look at the picture on the cover and could feel my insides already becoming redder, bluer and whiter. I knew from the beginning this would be nothing more than your typical American movie: tough, muscular,  smart but conflicted policeman/soldier/detective (Tom Cruise) who doesn’t give a shit about the law because he’s simply better than the rest of us mortals, a pretty girl  (I guess) who needs his help and was a horrible actress, bad-to-the-bone guys with scars, the inevitable car chase, and one too many shooting scenes for my taste.

My favorite part of the movie is when Jack is being chased by both the police and the bad guys, by car as well as by helicopter. He’s about to get caught when he  jumps  out of his vehicle to camouflage among some people waiting for the bus. One of the guys at the bus stop loans Reacher his hat to help him hide from the police, who just arrived at the scene. Why? Why the hell would you do something like that? What if he just killed a bunch of people? Robbed your bank? Raped your daughter? Mind-blowing, really.

We could never figure out why the people die at the beginning of the movie, why Jack Reacher shows up to help, or why the bad guys were the bad guys. All I know is that after watching this movie one should automatically be granted the American citizenship.

One thought on “New naturalization requirement”