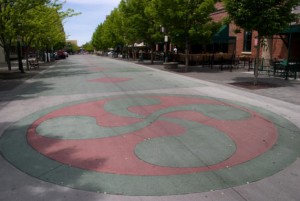 I’ve been back home since Sunday and just now I’m starting to have trouble sleeping. I think my jet-lag had jet-lag. So, like pretty much everybody does when they can’t sleep, I got on Facebook to see what was up, and I lucked out when I ran into this wonderful article by Elizabeth Shostak about Basque-Americans.

Shostak starts by giving some background on the Basque Country and the Basques, then goes on to touch on virtually every aspect of Basque-American culture; from the initial arrival of Basques in America, to traditions, festivals, cuisine, music, and of course, Basques in Boise. She even touches on Basque holidays, religion and funerals.

I hope you enjoy the article.

Though the Basques are perhaps the oldest civilization on the European continent, their precise origin remains unknown. The Basques lived in the Pyrenees before the arrival of Indo-European tribes during the second millennium B.C. Unlike other groups on the Iberian peninsula, they were not conquered by the Moors; Banu Quasi, however, who founded the Basque kingdom of Navarre in 824 A.D. , was a convert to Islam. Evidence shows that the Basques also successfully defended themselves against invasions from earlier groups, including the Visigoths, the Franks, and the Normans. Navarre was the first and only Basque political state, and during the reign of King Santxo the Great (999-1035) many Basque-speaking regions were unified under its jurisdiction. The kingdom withstood many challenges and was able to maintain independence for 1,200 years. In 1512, however, Castilian (Spanish) forces conquered and occupied the kingdom. The northern section of the region was ceded to France, and the rest was incorporated into Spanish territory.

Because Arab invaders did not vanquish the Basques, the Spanish Crown considered them hidalgos, or noblemen. This status allowed individuals of relatively modest backgrounds to find powerful positions within civic and church administrations. During the years when Spain concentrated on building colonies in the New World, several of the Basque elite were given important government posts in Latin America. In this way, a tradition of emigration was established among the Basques. In both France and Spain, the Basques enjoyed a large degree of political autonomy as well as economic and military privileges, which were codified in fueros, bodies of traditional Basque law.

By the late eighteenth century, political turmoil in France and in Spain took its toll among the Basques. The French Revolution and the Napoleonic campaigns brought invading armies to Basque territory in France; soon thereafter, during the 1830s, the Basques in Spain supported the conservative pretender to the Spanish throne, Don Carlos, whose cause was brutally defeated. His supporters were forced to flee the country, and many Basques made their way to Spanish colonies in America. When the Basques supported the Carlist rebellion of the 1870s, the Spanish government retaliated by abolishing the fueros.

The creation of the Spanish Republic in 1931 caused split loyalties in the Basque Country. The regions of Guipuzcoa, Vizcaya, and Alava supported the republic, hoping that the government would grant them autonomous status. Navarre however, vigorously opposed the republic. The ensuing civil war attracted international attention. The Nazi bombing of the Vizcayan city of Guernica, memorialized in a painting of that name by Picasso, was seen as a brutal suppression of Basque nationalist hopes. At the war’s end in 1937, many Basques went into exile. When dictator Francisco Franco assumed power, his government instituted harsh anti-Basque policies, most notoriously the suppression of the Basque language.

When Franco’s rule ended in the 1970s and the liberal Spanish monarchy was established, Basques pushed for self-governing status. The statute of autonomy recognized the Basque Country as an autonomous community in 1979, but radical Basque factions were not satisfied. The military wing of the Euzkadi Ta Azkatasuna(“Basque Homeland and Liberty”) is thought to be responsible for several bombings and other terrorist activities intended to publicize the Basques’ demands for complete political independence.

THE FIRST BASQUES IN AMERICA

Renowned as seafarers, Basque fishermen and sailors had probably reached American waters well before the voyage of Columbus in 1492. They were among the first Europeans to hunt whales off the northeastern coast of North America. When Columbus recruited his sailing crew, Basques made up the largest ethnic group on board, and they continued to participate in voyages across the Atlantic during the earliest years of European exploration of the continent. A few educated Basques held administrative posts in Spanish California, and several of the Spanish priests who founded missions there in the late 1500s were Basques. But large-scale immigration to the United States did not begin until the late 1800s.

One thought on “Basque-Americans, by Elizabeth Shostak”