Thanks to one of my Facebook, well, and real life friend too, Ander Caballero, I came across a very special story for Athletic de Bilbao fans. I couldn’t have thought of anything better to finish the week. 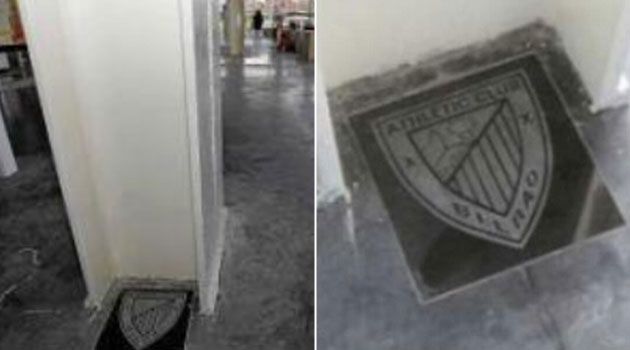 There is a shield of Athletic de Bilbao in Alicante’s high-speed train station (AVE), and no one knows how it got there.

The mistery shield in Alicante’s new AVE’s station is giving people something to talk about. Pepe Otxoa, spokesman for Adif, the Administrator of Railway Infrastructures in Spain, confirmed to radio station Cadena SER that the shield will be covered to avoid conflicts. “Adif is a public company that has to be neutral,” he said. Adif claims it doesn’t know who placed the tile with Athletic’s shield during the works.

Nobody knows who this Athletic fan is in Alicante. Adif, as well as the engineers responsible for the works, deny having placed the tile with the Athletic shield in AVE’s train station. The shield will be concealed in the next few days to avoid controversy.

Adif’s spokesman in Alicante, Pepe Otxoa, told Cadena SER in Euskadi how surprised he was by the find. The shield will be maintained, but it will be covered to avoid controversy in the train station. The shield came under attack in Alicante’s capital when the shield appeared, left there by an anonymous perpetrator.

“Adif is a public company that must be neutral. That’s why we’re hiding it, to avoid problems,” Pepe explains. The fact that the shield belongs to Athletic de Bilbao instead of any other club could spark even more negative comments if left uncovered.

After the works in Alicante’s high-speed train station were over, users discovered Athletic’s shield on the floor, by one of the columns. Once it became public knowledge, the search for Athletic’s fan started.

Initially it was thought to be an engineer’s signature, which is something relatively common, but after talking with him, the theory was ruled out. Operators also deny being the guilty party.