(Taken from today’s edition of the Idaho Statesman) 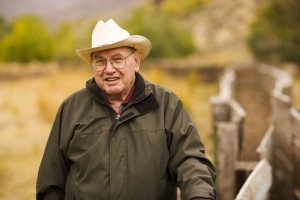 BOISE, IDAHO — Pete T. Cenarrusa, a Basque-American who held state office in Idaho uninterrupted for more than five decades and spent nearly as long in the sheep business, has died. He was 95.

Cenarrusa died about noon on Sunday at his home in Boise after a battle with lung cancer, said Roy Eiguren, president of the Cenarrusa Foundation for Basque Culture. Cenarrusa’s wife of 66 years, Freda, was at his side.

“He was an exceptional human being who did so much for Idaho and its people,” said Eiguren. “He will be deeply missed.”

Cenarrusa was elected to the Idaho House of Representatives as a Republican in 1950 and served nine terms, including three terms as Speaker. Governor Don Samuelson appointed him Idaho Secretary of State in 1967.

He held that post for nearly 36 years, retiring in 2003 at age 85. His longtime chief deputy, fellow Basque Ben Ysursa, succeeded him as secretary of state.

“He was a great mentor and friend to me for over 40 years,” said Ysursa. “He’ll be sorely missed. He was the epitome of a true public servant. He was respected by all Idahoans — his integrity and devotion to making government accessible and responsible. He was just a good man.”

Quane Kenyon, a former reporter for The Associated Press, covered Idaho politics for 25 years and wrote a book about Cenarrusa titled “Bizkaia to Boise.”

“If all public office holders were as honest and straightforward as Pete the nation would be much better off,” Kenyon said. “He was the most prominent Basque in the United States for many years.”

Pete Thomas Cenarrusa was born Dec. 16, 1917, in Carey, Idaho, the family said in a short biography. His parents were Joe Cenarrusa and Ramona Gardoqui, immigrants to the United States from the Province of Bizkaia in the Basque Country of Spain. His parents came from cities 8 miles apart in Spain but met for the first time in 1914 in Shoshone, Idaho, where they later married.

Cenarrusa was the second of five children. All spoke Basque, only learning English when they entered primary school in Bellevue. Cenarrusa retained his love of the Basque language throughout his life, and made more than a dozen trips to the Basque Country.

He graduated from Bellevue High School in 1936 and the University of Idaho in 1940 with degrees in agriculture and animal husbandry. He was a member of the university’s boxing team that won a national intercollegiate championship in 1940, and he sometimes recalled his boxing youth.

“He would tell me he’d rather take a beating than give a speech,” said Ysursa. “He’d rather have a good-natured chat and shoot the breeze than give a formal presentation.”

After college, Cenarrusa taught high school in Cambridge, Carey and Glenns Ferry, and also coached football. He joined the Marine Corps in 1942, went through flight training, and was commissioned a 2nd lieutenant.

For 18 months, he was an instructor in Naval Aviation in Corpus Christi, Texas. He was eventually ordered to North Carolina to train in a dive bomber for the invasion of Japan, but the war ended when atomic bombs were dropped on Hiroshima and Nagasaki.

Cenarrusa went into inactive reserve until his retirement in 1963 with the rank of major. He continued to fly as a private pilot, logging more than 15,000 hours of flight time.

Kenyon said that Cenarrusa often flew to parts of the state in connection with his duties as secretary of state as one of five members on the Idaho Land Board. He also flew to the family’s sheep business operations in Idaho, Nevada, Arizona and California that he and his wife owned from 1954 to 2000.

“He was a sheep man,” Kenyon said. “He was a Republican second and a politician third.”

He and his wife also started what eventually became the Cenarrusa Foundation for Basque Culture, which works to preserve the Basque culture and identity.

“It’s part of his legacy that will continue very strongly,” said Ysursa. “He was a great asset to the Basque community here and abroad. His influence will be missed. That’s a void that’s going to be very hard to fill.”

Cenarrusa is survived by his wife, daughter-in-law Jean Cenarrusa-Jacobson and her husband Greg, two grandsons and two great grandchildren. One of the great grandchildren, a boy, was born on Saturday. His parents and siblings preceded him in death. A son, Joe Cenarrusa, died in an aircraft accident in 1997.

One thought on “Former Idaho Secretary of State Pete Cenarrusa died on Sunday, September 29, at the age of 95”