A few days ago we learned, sadly, about the passing of Pete Cenarrusa, one of Idaho’s most influential Basque-Americans. Shortly after, Spanish national newspaper ABC published an article by former Spanish ambassador to the United States, Javier Ruperez, where he pretty much equates being independent to being a terrorist, such a tired argument anymore.

We don’t know Ruperez. But he also doesn’t know Basques, and he certainly didn’t know Pete. And we think it’s a very small person who sticks a knife into the back of a man who has just died. Some of us have the honor of havind met this great Basque-America at some point in our lives; and some of us don’t. However, we all wanted to reflect on Pete’s significant contribution to the preservation of Basque identity inside and outside the Basque Country (see the personal reflections of About the Basque Country and Bieter Blog). The eight blogs that sign this post (A Basque in Boise, About Basque Country, Basque Identity 2.0, Bieter Blog, 8 Probintziak, Nafar Herria, EuskoSare, and Blog do Tsavkko – The Angry Brazilian) could not stand still regarding Ruperez public defamation of Pete Cenarrusa. We encourage you to freely share this post and make it yours in your own blog, website or social network.

UPDATE: Dan Popkey has written an article published today, October 10, 2013 in the Idaho Statesman regarding our blogs initiative where he also includes some comments from Geddes setting the record straight: Cenarrusa still stirs pot in Spain. 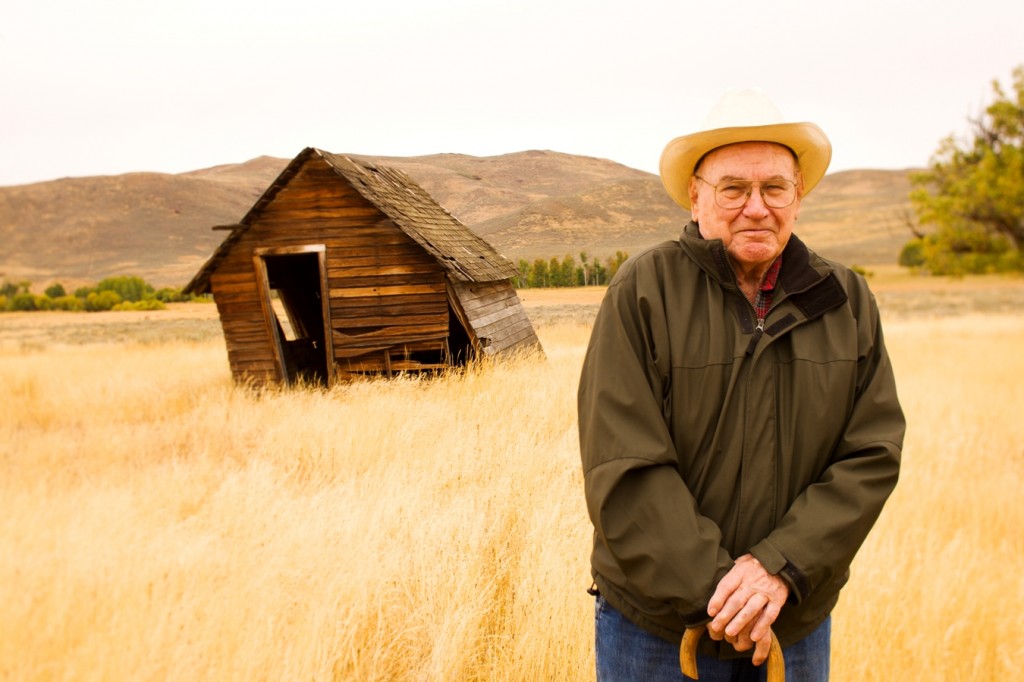 Pete Cenarrusa died last week at age 95. To begin with, it’s strange to speak of “defending” Pete from anything. He was a wonderful person, somebody many of us admired and respected. His parents were immigrants who grew up in neighboring Basque towns but who met thousands of miles away in the middle of Idaho. Pete’s first language was Basque, and he kept speaking it for the rest of the life, sometimes throwing in English words along the way.

Pete went to the University of Idaho, where he was on the boxing team and completed degrees in agriculture and animal husbandry (at age 92, he blogged that his favorite courses were nutrition, organic chemistry, and bacteriology—“I would recommend these courses to everyone in college.”) He joined the Marines in 1942 and became an aviation instructor. He flew for 59 years, more than 15,000 hours of flight time without an accident.

Pete was elected as a Republican to the Idaho House of Representatives in 1950 and served nine terms, including three as House Speaker. In 1967, when Idaho’s secretary of state died, the governor appointed him to fill the position, where he served until 2003. He wasn’t a politician from central casting. As his friend and successor said at his funeral, Pete wasn’t a good public speaker; but unlike most politicians, Pete knew it. Still, it’s hard to argue with success: Pete never lost an election, and he was in public office for 52 years, the longest-serving elected official in Idaho history.

Then the Spanish national newspaper ABC published an “obituary” by Javier Ruperez, the former Spanish ambassador to the United States. Ruperez calls Pete a “Basque separatist,” a man filled with “blind obstinacy” against Spain “until the very day of his death.” It was a piece written with venom saved up from an event that happened more than a decade ago, spewed out just a couple days after Pete died. Pete can’t stand up for himself now. That’s why we feel a strong obligation to do so.

Deceased at 96, Cenarrusa – which was the way he had shortened his paternal surname Zenarruzabeita – had the leading role in Idaho’s political and social scene for almost six decades, being elected several times to the local legislature and carrying out for years the role of Secretary of State in the rustic territory. His parents emigrated from the Basque Country to the United States at the beginning of the 20th century, as many of their compatriots did in those days, in response to the call for sheepherders to run the significant number of livestock in the American West.

From early on, conscious of his Basque origins, he tried to promote individual and collective memories in the environment of his countrymen, an activity that took a noticeable nationalist tone in the 1960s. He wasn’t awarded the prize “Sabino Arana” to the “universal Basque” by the Basque Nationalist Party for nothing.

It was in 2002 when these nationalist inclinations took shape in the attempt to make the Idaho legislature adopt a memorial that ignored ETA’s terrorist activities, demanded a favorable disposition from Spain and France to negotiate “the end of the conflict,” and asked for the self-determination of the Basque Country. Cenarrusa was the inspirer and visible leader of the attempt, for which he had the support of Ibarreche’s Basque government and Batasuna’s contacts incarnated in journalists for “Gara” and “Egunkaria”, regular visitors of the land where they received the hospitality of then local legislator and now mayor of Boise, Idaho’s capital, David Bieter.

The government of Jose Maria Aznar warned George W. Bush’s White House about the maneuver, and made Idaho legislators realize the inconvenience of adopting texts which were offensive to a friend and allied country such as Spain. The spokesman for the Department of State made a strong statement during those days that said, among other things: “The Spanish people suffer the violence carried out by a terrorist organization called ETA on a regular basis.” Exactly what the memo Cenarrusa/Bieter/Ibarreche/ Gara/Egunkaria did not want to gather. And that to the dismay of its sponsors ended up written in the amended text, which was eventually approved by the Idaho legislature.

It was in January 2003 when Idaho’s Senate president had the opportunity to communicate to the representatives of the Spanish government his regret for what happened, blaming it on the extreme ignorance by local representatives about Spanish affairs and the generalized willingness to please Cenarrusa in the last initiative he took on before retiring from his role as Secretary of State. Robert L. Geddes had begged the veteran rancher and politician of Basque origins that “the next time he wanted to declare war on Spain he give him prior notice to avoid misunderstandings.” On that same occasion Idaho’s Senate made the Spanish ambassador in Washington honorary citizen of the State. And Spain officially named Adelia Garro Simplot, another Basque descendant, honorary consul in the area. Garro is the abbreviation of Garroguerricoechevarria. Cenarrusa, who had not thrown in the towel in his blind obstinacy against constitutional and democratic Spain until the very day of his death, wasn’t able to make himself the only representative of Idaho’s Basque community.

As Mark Twain would say, not all deaths are received in the same way.

And an important bit of background: Ruperez , the author, was kidnapped by the Basque terrorist group ETA in 1979. He was held for a month. After he was released, 26 Basque prisoners were freed from prison, and the Spanish parliament agreed to create a special commission to investigate charges of torture of Basque prisoners. We can’t imagine what Rupérez went through, and we wish it would never have happened. It would certainly shape one’s world view. But Pete had nothing to do with that horrible event, and we know he would have condemned it. And that’s where Rupérez is horribly wrong about Pete and about Basques generally.

Toward the end of his career, Pete announced the introduction of a declaration in the Idaho legislature that addressed a critical series of events in the Basque Country and Spain. The declaration, officially known as a “memorial,” called on leaders in the United States and Spain to undertake a peace process. In 2002, Ruperez caught wind of the memorial and immediately flew out to Idaho, alerted the Spanish prime minister, the State Department, and the White House. Suddenly, a declaration by the legislature of a small Western state blew up and became international news.

As the memorial got close to a vote, there was a lot of back and forth among the many parties that had suddenly become involved. But Pete’s reaction was pitch perfect—paraphrasing him: Since when did the United States start running its foreign policy by foreign governments? In the end, the Idaho legislature unanimously approved this memorial. It described the history of Basques in Idaho, the earlier actions by the Idaho legislature to condemn the repression of Franco’s dictatorship, the efforts of Basques to maintain their culture, and all “but a marginalized fraction” of Basques’ condemnation of violence.

Perfect or not, it was a unanimous statement by a democratically elected, autonomous state legislature. But it seems to have haunted Ruperez all these years. Barely 72 hours after Pete had died, Rupérez condemned Pete as “the inspirer and visible leader” of an effort that turned a blind eye at violence, an effort that an Idaho Senate leader later purportedly told him was the result of the “extreme ignorance by local representatives” about Spanish affairs and “the generalized willingness to please Cenarrusa in the last initiative he took on before retiring.” Rupérez suggests that Pete was not typical of Idaho’s Basque community, that there were others who are worthier representatives.

Ruperez closes with a quote he says comes from Mark Twain: “Not all deaths are received in the same way.” Maybe that’s true. Either way, we can assure Mr. Ruperez that Pete’s death was received with a great deal of sadness and with the respect worthy of somebody who had done great things with his life. We would like to conclude by using another quote from Mark Twain that clearly suits perfectly for people like Javier Rupérez: “Better to keep your mouth shut and be thought a fool than to open it and remove all doubt.”