UPDATE (10/18/13): New York Basque Center’s president has resigned from his duties as president, citing personal reasons. I could only find the article in Basque on the EITB.com website. 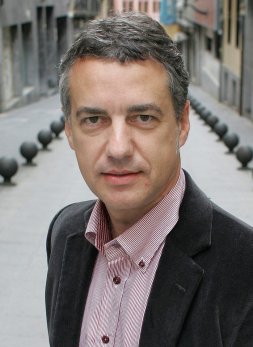 I think I was the only Basque in the whole country to miss the party in New York last week for the 100th anniversary of their Basque Center. Lucky for us, fellow blogger Anne-Marie Chirambero was there and wrote a wonderful multimedia recap of the entire weekend for her blog,  Hella Basque.

However, not everything went smooth during the event. As a friend brought to my attention yesterday, there was apparently some protocol battle between the event organizers and the Basque Country representatives at the Gala that not everybody noticed as it unfolded. It all started when the New York Basque Center board was about to show a video (in Basque) sent by Juan Karlos Izagirre, Donostia’s mayor, where he greeted the New York folks, thanked them for their great work, and talked a bit about the importance of keeping the Basque language alive, both in the Basque Country as well as abroad. I’ve listened to it a couple of times, there is nothing in those 60 seconds that could be considered offensive, other than this particular mayor doesn’t belong to the Basque Nationalist Party (as does Iñigo Urkullu, the president of the Basque Country), but to Bildu instead, a Basque nationalist, separatist and leftist political coalition.

I have to admit that politics is definitely not my strong suit; I spend very little time thinking about it and I realize that I have a very simplistic view of the whole dynamics. I will also point out that the president’s party gave some money to the New York Basque Center in order to promote the Basque Country strategy in the United States and commemorate its 100th anniversary. Finally, I’m shaping my opinion based almost entirely on the article below and the mayor’s message. With everyting, I still think that a one-minute greeting video message shouldn’t have prompted a mini crisis cabinet to decide whether Urkullu would make an appearence or not if the video was shown.

The thing I like about living in the diaspora is how little of a role politics plays in general in our Basque Centers. We have our challenges and disagreements, of course, but ultimately, they are centers open to all Basques, whether you’re from the old country or a third generation Basque-Something. Celebrating 100 years of hard work helping Basques get aquainted with new and often hostile surroundings, in addition to making connections possible between newcomers and already settled Basques is something to be proud about and worth celebrating. In my opinion, promoting a sense of unity as Basques should be one of the most important things to work on, especially for us Basques in the diaspora, as opposed to acting like this is a beauty contest.

Oh well. I guess this is why I stay away from politics as much as possible. The incident sounds so petty I can’t believe it actually happened. According to the article though, it looks like both sides ended up chalking it up to a misunderstanding and are moving on. I leave you with the translation of the article published by Diario Vasco on Wednesday. I’d love to hear your opinions on the matter.

The Basque president threatened not to attend the center’s 100th anniversary if their leaders shared a message sent by Donostia’s mayor.

Last Sunday night’s celebration of the New York Basque Center’s 100th anniversary, a festive event attended by a wide social and political spectrum, and which was one of the most important events in the president’s US tour last week, ended on a sour note both for the members of the autonomous government and the Basque Center’s executive board. Long faces, affronts, crossed accusations, veiled threats… A tense situation caused by the Basque Center board’s efforts to show a greeting video message by San Sebastian’s mayor, Juan Karlos Izagirre, from Bildu, which was opposed by Iñigo Urkullu.

The organization that serves as refuge for members of the Basque community had organized a flashy party to remember its birth. To highlight the event, the promoters had invited several authorities. The list was long and inclusive. In addition to Iñigo Urkullu, invitations had also been sent, among others, to the previous two Basque presidents, Juan Jose Ibarretxe and Patxi Lopez (Spanish Social Party), Navarre’s president, Yolanda Barcina (Union of the People of Navarre), and Bilbao’s mayor, Iñaki Azkuna (Basque Nationalist Party); Vitoria’s mayor, Javier Maroto (People’s Party); and San Sebastian’s mayor, Juan Karlos Izagirre (Bildu). The Basque socialist leader, autonomous community of Navarre’s leader and the three mayors offered their apologies for not going, although Donostia’s mayor sent a greeting video message. And that’s where the issue arose.

“Our plan was to show the mayor’s message. It was our party and we wanted it to be as inclusive as possible,” New York Basque Center’s president, Aitzol Azurtza, a 39-year old man from Donostia who has lived in the United States for the last 15 years, said via telephone to this newspaper.. However, according to Azurtza, Urkullu’s collaborators opposed it by arguing that the Basque president’s appearance couldn’t be “topped” by any other authority.

Tension kept increasing. The Basque government warned the Basque Center members that showing the video was not viable. Not only that, but the president’s delegation called a mini crisis cabinet in the hotel lobby where the meeting was going to be held to decide whether they would attend the event or not. The threat was real.

In the end, the New York Basque Center board agreed to withdraw Juan Karlos Izagirre’s message. “They gave us an ultimatum. They told us they needed an hour to reconsider the situation: either we withdrew the video or the Basque president wouldn’t attend. And we agreed in good faith,” said Aitzol Azurtza, who emphasizes there were conversations “at the highest level” to try and solve the mess. But by then, the atmosphere had become noticeably tense.

The party started without the Basque president, to the general shock and nervousness of those present. “There were more guests. We could not make them wait. It was our party, the Basque Center’s party, and we invite whomever we want and organize it however we want,” stresses Azurtza, who in his short speech during the celebration pointed out that the organizations in the diaspora must be a reflection of the “diversity in the Basque Country.”

The situation reached such a point that the presenter at the party forgot to mention Iñigo Urkullu’s presence and stripped him of his president title. Immediately afterward, the honorary aurresku was performed for the organization leaders, not for the executive chief. He wasn’t even greeted with a txapela gesture, which caused a notorious discomfort inside the Basque Country’s delegation.

“Someone did not understand correctly. This wasn’t an event to honor the lehendakari, but our anniversary celebration to which the lehendakari was invited, Navarre’s president and other officials. It’s very different. We wish Barcina would have been able to come to greet the people from Navarre that were there,” stresses Aitzol Azurtza without hiding his uneasiness. “This has hurt our feelings. The affront was theirs. It was really ugly and not tasteful at all,” maintains the center’s representative who, in any case, decided to move on and consider it a misunderstanding.

From the Basque Government an effort was made yesterday too to put the controversy in perspective. Official spokesmen referred to the words offered by the president during his press release last Monday, when he pointed out a “previous disagreement related to the event’s script.” Urkullu stated that a “sufficient agreement was reached as to how the event should develop, according to the institutional respect an event should have that was subsidized in part” by the Basque government. At the end of August, the Basque government granted a subsidy of 30,000 euros to the New York Basque Center in order to promote the Basque Country strategy in the United States and commemorate its 100th anniversary. Additionally, the Basque president reminded us that he took part as the “highest institutional representative” of the Basque Country.