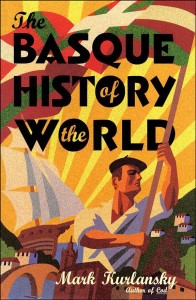 In a new article published yesterday by the Basque Tribune, Mark Bieter explores and comments on Kurlansky’s Basque History of the World. The book came out in 1999, but it remains a great reference for Basque history. I read it long time ago and have forgotten a lot of the details, so it might be time for a refresher.

I particularly enjoyed Mark’s introduction to the article, which poses a question most Basques outside of the Basque Country have asked themselves at some point or another: What does it mean to be Basque? I myself was born in Bilbao and struggled with the notion for a long time. My son is now starting to question his heritage after he learned he won’t be able to play for Athletic de Bilbao, no matter how good of a soccer played he ends up to be, due to the club’s definition of a Basque.

It’s always interesting to delve into the complex issue of Basque identity, but for now, I will leave you with Mark’s lastest essay.

An Essential Basque History, Written by a Non-Basque

One of the challenges of being Basque can be figuring out exactly what a Basque is. Is it somebody who speaks Basque? There are a lot of people who don’t but still consider themselves Basque. Are they wrong?

Is a Basque somebody born in the seven provinces of Euskal Herria? That’s not a perfect solution either, because there are many who were born there, whose parents and grandparents were born there, who say they’re Spanish or French, not Basque. By contrast, there are thousands of newcomers to the area who believe they are Basque. The problem with them, as with anyone else who struggles with the question, is that they’re really just giving an opinion. There’s no Basque passport.

Mark Bieter is an attorney and writer in Washington, D.C.
More of his writing can be found at bieterblog.com
mark@markbieter.com
@markbieter