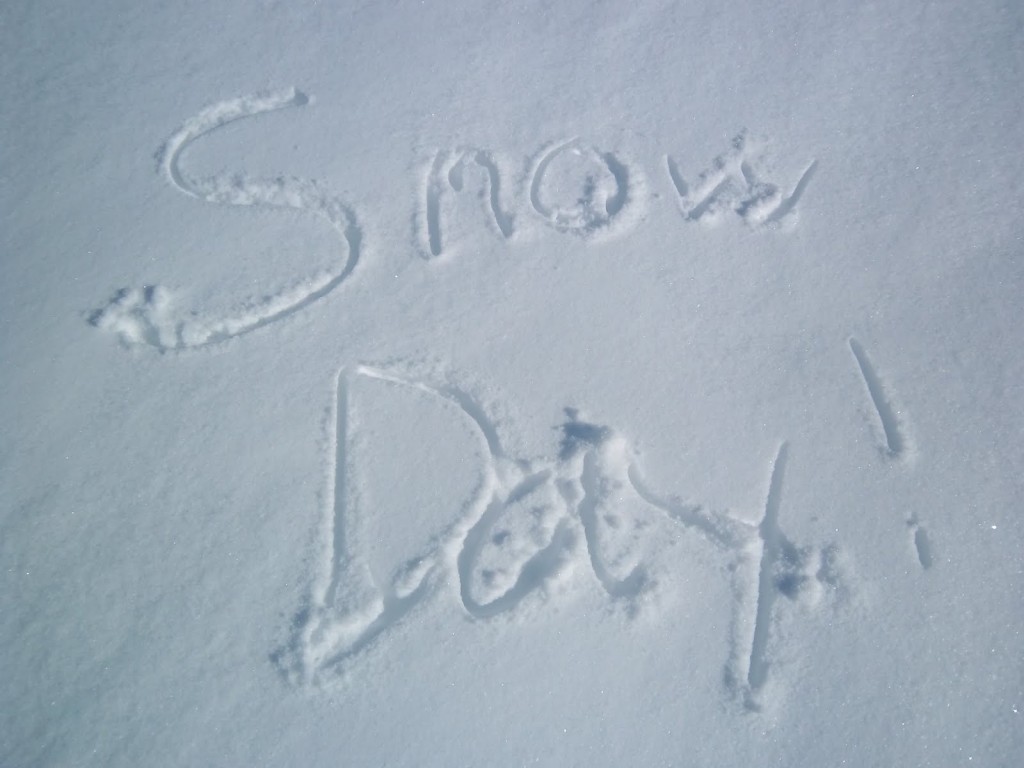 Even though Friday was tough (I realized I’ll be in the hole for a while after my trip with the kids to the Basque Country this summer), it was also a great day because the Boise School District decided to call it a Snow Day, the first one this year. Surprisingly enough, I had planned ahead and taken the day off from work (am I finally a responsible adult?), so when I woke up and read the school’s email I was as happy as the kids when I told them we had a free pass to stay home and relax. It was nice to take a step back from the rush of our usual days and just hang.

There was time for making loom bracelets, knitting blue and orange sleepers, playing on the computer, watching movies and talk. Andoni explained to me how the US built this huge wall in DC with the names of the thousands of American soldiers who died in the Vietnam War (had I ever heard of it?) because they wanted to stop Communism. I wonder if he even knows what Communism is. He probably does too. The kids always surprise me with knowledge I didn’t think they had. No matter how hard I try, I can never keep up with how fast they are growing up. Just the other day I was changing diapers and now I sound like my mom.

I am not completely wrong, though. We did find some real, visible physical evidence on Sunday that Andoni is entering his pre-teen years. However, I won’t go into details because it is a hairy subject and I promised him I’d keep it on the down low.

I also learned that in about three more years my son won’t be able to jump on the sofa with me and give me hugs because he’ll be fourteen already, a teenager, and might even have a girlfriend by then. But it will be ok to hug each other while we are standing up.

Listening to the Vietnam history lesson I thought about the difference between the things they learn and what they taught me in school. Sure we touched on international events and various world wars, but I know for sure that nobody is telling my kids to cross out “Spain” in a text book and write “Spanish State” underneath instead. I was only seven or eight years old at the time and didn’t think too much of it, but soon I realized how a small change in wording represents a strong political statement. I wonder what type of subtle statements the kids hear at school on a daily basis that I might or might not agree with. I guess it could be worse and we could have ended in China, unable to Google forever. I can’t even think about it without my chest tightening.

Maitane, on the other hand, still takes life a little bit more like the 8-year old she is and went out to the yard with a few stuffed animals, some ketchup, cucumbers and carrots, to make a snowman for her dolls. She managed to pull these skinny jeans of hers all the way to her waist without breaking a sweat, buttoning them up over two pairs of leggings. Amazing. I usually wonder how the hell she fits into the jeans as it is, so I couldn’t believe it when I helped her free herself from the three layers of clothes after she was done playing and completely wet from the snow.

We finished the day by getting some snacks and watching “Princess” on Netflix. I’m such a sucker for children’s movies that now, even when it’s late and the kids are sleeping and I could watch whatever I wanted, what do I choose? Things like “16-Love“. It’s not just a romantic comedy, it is a teenage romantic comedy. I know. Or maybe I’m subconsciously getting ready for what’s coming in the near future. I must mention, however, that I was drinking wine while I watched it, in case that counts for being a grown up or something.