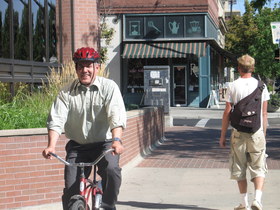 The City of Boise is applying for designation as a Bicycle Friendly Business from the League of American Bicyclists, and they need your help to make it happen.

As part of the standard review process, the league requests that the City provides this anonymous survey to City customers about their experiences bicycling to the City’s facilities (City Hall, libraries, parks, etc.). The survey takes no more than 10 minutes and is available online:

Important: Even though the survey says it’s only intended for employees of the City of Boise’s City Hall Building, I just received word from Michael Zuzel, Office of the Mayor, that the survey is actually intended for both employees and customers. So please go ahead and fill out the survey. The city needs as much feedback from every source as possible.

The deadline for this survey is Wednesday, February 19, 2014.

The Bicycle Friendly Business review process concludes with awards officially announced in April. If the City of Boise receives an award, it will be included in a national press release soon thereafter.

To connect with the Mayor: