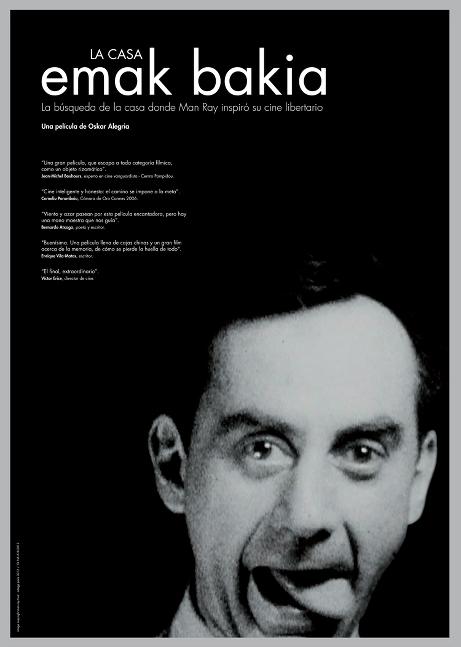 Emak Bakia (“Leave me alone” in Basque), a film by Man Ray, will be playing at The Flicks on Saturday, March 22nd, as part of Boise’s Treefort Music Fest.

This festival, conceived as an extension of the current momentum in the Boise music scene and art scene at large, aims to provide the opportunity for Boise to play host to the national and regional music scenes while showcasing the local up-and-coming talent.

According to Philippe Acheritogaray, director of the Basque Education Organization (BEO), the film was a huge hit at the last San Francisco International Film Festival. He says that over 80 people showed up at the center to watch it, and many saw it again from the festival.

An avant-garde film by Man Ray called Emak Bakia (“Leave me alone” in Basque) inspires this story of a quest. The house near Biarritz where Man Ray’s film was shot in 1926 bore that peculiar name and the creator of this new film decided to undertake a search on foot to find it. Only three views of that mansion exist: the image of its front door, two columns of a window, and a section of nearby coast. A search based on these old images would not be easy. There was nothing listed in the archives and no one today remembers the house. Therefore, he would ask for help and assistance from other informers, such as chance and the wind.

Info on the director:

Trained as a journalist, he began working as a reporter in Madrid on news programs for Canal Plus and CNN+. He has been an editor of cultural programs and the coordinator of shows dedicated to literature for the television channels Telemadrid (Los Cinco Sentidos-”The Five Senses”) and Euskal Telebista (Sautrela). In the area of gastronomic documentary, he has written and co-directed the series “Masters of Basque Cooking” for ETB-telebista with the chefs Arzak, Subijana, Aduriz, Berasategui and Arbelaitz.

Since 2002, he writes travel reports for the supplement to El País, El Viajero, and is the author of a photographic artistic project called “Las ciudades visibles” (“The Visible Cities”), endorsed by the author Enrique Vila-Matas. Since 2009, he is a professor of documentary scripts in the Masters of Audiovisual Scripts from the University of Navarra and he has led a Workshop in Abstract Photography for children in the Chillida-Leku Museum.