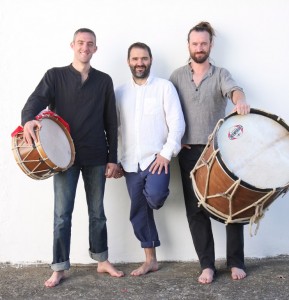 Once again, Astero weekly bulletin brings some interesting news, this time about a new movie being made around Kalakan‘s participation in Madonna’s world tour. This full-length documentary called Sagarra Jo not only tells the story of Kalakan’s involvement in the tour, but it also addresses the “place of minority expression inside an equalizing mass culture.”

Madonna met Kalakan during a visit to the Basque Country in the summer of 2011, and in 2012, Madonna kicked off her World Tour Sagarra Jo along with the Basque trio. Boise State professor Nere Lete, who teaches in the Basque Studies program in the Department of Modern Languages and Literature at Boise State University, assisted the crew for pop star Madonna’s tour.

If you would like to know more or contribute to the crowd funding campaign to ensure the completion of the project, click here (for English) or here (for Spanish).