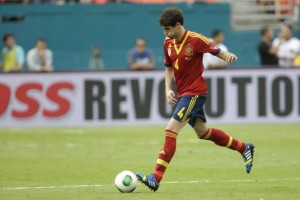 Javi Martinez needs no introduction. The 25-year-old is one of the best Basque players in the world and is very experienced, having recently won the Champions League with Bayern Munich and featuring regularly in the Spain national team.

Martinez is one of the best holding midfielders in Spain and will definitely be on his way to the World Cup this summer. He can also feature as a centre-back, which makes him a very useful player in any squad.

The former Athletic Club star is known for his ability to read the game and keep possession. He is a lot like Sergio Busquets, just with more of a defensive mindset.

Martinez would form a solid pivot in front of the defensive and would partner well with the Basque midfielders. He could also slip back into defence if needed without the team skipping much of a beat.

If he was to play as a centre-back, then Ander Iturraspe could easily take his spot as holding midfielder.