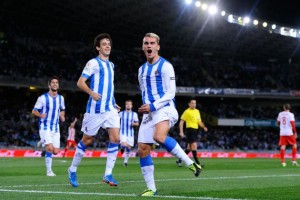 If Aymeric Laporte is eligible to play for the Basque national team due to his extended bloodline and youth football, then Antoine Griezmann is certainly able to as well. The 23-year-old French winger joined Real Sociedad’s youth academy back in 2005 and it has been all success ever since.

Griezmann is a fast winger who loves to run with the ball and take a lot of shots. He can put a lot of pace on his shots and is already known for scoring some unbelievable goals in his time at Real Sociedad.

Playing on the right-wing would put him a bit out of his normal position, but Griezmann has played on that flank before and has the ability to do the job well. His pace would make him a dangerous weapon, and the Basques would benefit from his endless energy and competitiveness.

In all likelihood, Griezmann would still choose to represent France and has been listed in the country’s squad list for the World Cup. Were that the case, Athletic Club winger Markel Susaeta would have no problems slotting in on the right.

One thought on “9.Antoine Griezmann”