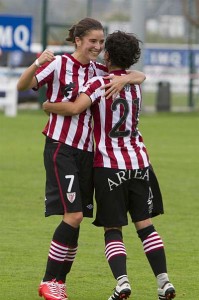 The Basque Studies Program at BSU is putting together a soccer camp in Boise this July that would coincide with the annual San Inazio Basque Festival. But this is not just any soccer camp; the instructors at this camp would be members of the Athletic Bilbao Women’s Team as well as some of the coaching staff from Boise State University’s Women’s Soccer program.

Before going forward they would like to find out if there would be interest in such a camp, and so are asking folks to fill out a survey that can be found here. Tentative camp dates would be July 21-24, 2014 and it would be for both boys and girls. They hope there is enough interest to run this camp as it would be “a unique opportunity for all!”

Also, the survey wants to find out how many people would like to see a friendly game between La Liga men’s soccer team, Athletic Bilbao from the Basque region of Spain, and a U.S. professional men’s soccer team in Boise on July 29, 2015. Athletic de Bilbao has already committed to make the trip. This would be the first time Athletic de Bilbao plays a game in Boise, and who knows when it will happen again!