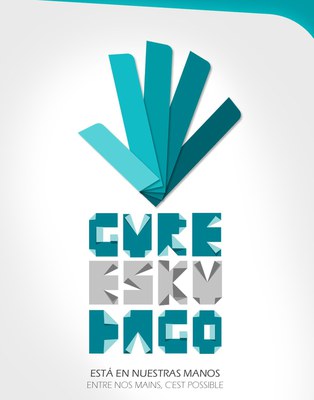 By now, you are probably familiar with the “Gure esku dago” (It’s in our hands) movement in favor of the right to decide in the Basque Country. If not, here is some background to get you caught up with their message.

Gure esku dago (It’s in our hands) is a citizens initiative that began on June 8, 2013. Their main goal is to achieve citizen support for the Basques’ right to decide. The movement is all-inclusive, as it extends to everybody its invitation to participate.

Among the various activities organized by the group, the most important is the Human Chain scheduled for June 8, 2014, that will connect Durango to Pamplona (76 miles). More than 50,000 people will join hands for 30 minutes under the slogan “We are a nation, we have the right to decide, it’s the citizens time.”

Although the Human Chain will take place in the Basque Country, there are no geographical limitations to participate in the event. Yesterday I was on the phone with Jon Camio, the coordinator for the initiative in the Basque Diaspora, talking about different ways for Basques in the Diaspora to join in. Some large cities in the Diaspora are organizing their own chains on a smaller scale, as is the case of San Francisco, New York, Buenos Aires, or Santiago de Chile, but people can also show their support by recording a video of themselves or with friends or taking pictures, and posting them to the group’s website or their Facebook page.

For more information, check out the article published last month by Euskalkultura.com: The “Gure Esku Dago” initiative comes to the Diaspora and invites everyone to participate in a Human Chain on June 8th.