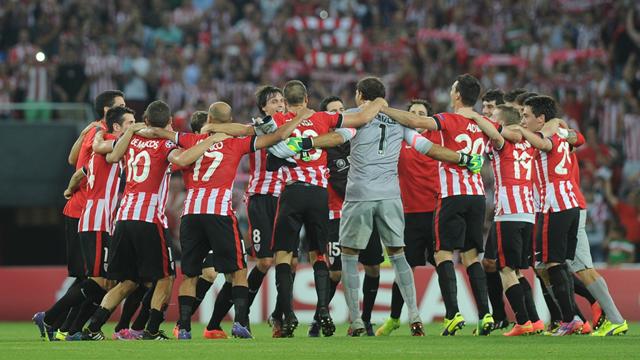 It’s Friday. The game was on Wednesday. I can’t imagine any real Athletic fan still clueless about our team’s win over Napoli, which got us into Champions League. But just in case you were in a coma, vacationing in the Sahara or something weird like that, Athletic Bilbao celebrated their first official game at the stunning new San Mames stadium by qualifying for the Champions League group stages with a 3-1 win over Napoli in their second-leg play-off clash.

Judging by the videos I’ve see so far, life stopped for for a few hours in Bilbao on Wednesday while the game was on. Hell, even Napoli fans were shocked by the good vibes and celebratory atmosphere surrounding the stadium before the game. Needless to say, emotion and cheering multiplied after the game, when players and fans celebrated the victory together.

According to The Bleacher Report, Athletic had never lost against Italian opposition at the old San Mames, and they continued their excellent home record at the upgraded venue with a brilliant performance against the Italians, which completed a 4-2 aggregate victory.

Aritz Aduriz scored a double and Ibai Gomez added a third in front of a vibrant home crowd after Marek Hamsik had put the Italians ahead against the run of play at the start of the second half.

For the winners and losers in this encounter, check out The Bleacher Report complete article, Athletic Bilbao vs. Napoli: Winners and Losers from Champions League Qualifier.

The official schedule for the Champions League has yet to be released, but the groups are already set. Athletic will play in Group H against Porto, Shakhtar Donetsk, and Bate Borisov.

I was totally relieved when I saw that we avoided Ludogorets in the raffle. You might have never heard of them, but the Bulgarian team made history on Wednesday by defeating Steaua Bucuresti in the penalty kicks. Ludogorets’ goalkeeper was expelled from the game during overtime, and with all three substitutes already used, central defender Cosmin Moti was forced to go in goal for the resulting penalty shootout. He saved two goals and gave his team the victory and the pass to Champions League. I hope Real Madrid crashes and burns when they play against them.