There is no way I can pass the opportunity to share this article from The Guardian. It’s not just bias Athletic fans raving about our team’s philosophy anymore, the world is taking notice as well. I’d go on, but Simon James explains it way better than I ever could.

What Athletic Bilbao can teach brands about risk and innovation 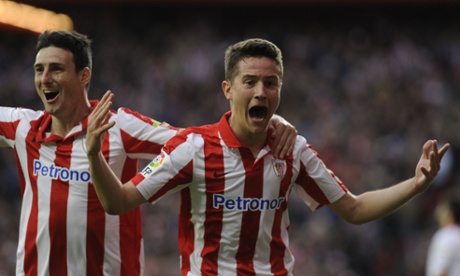 Imagine a sports team from a city consisting entirely of players from that city, never trading or buying players from outside the city, consistently doing well, regularly selling their best players and then still doing well. The club refuses to pick anybody from any other city. Oh, and there is another popular club in the city that takes half of the available citizens to play for the arch rivals, depriving the club of half of the available talent pool.

That’s what happens at Athletic Bilbao, a Basque team competing in the Spanish La Liga competition. Athletic only field Basque players. There are 2.6m Basques in Spain – equivalent to the metropolitan area of Pittsburgh or Liverpool.

Athletic have never been relegated in their history (sharing the honour with Barcelona and Real Madrid), and this year, hidden behind the grand achievements of Atletico Madrid (containing two Belgian, two Uruguayans, four Brazilians, a Portuguese and a Turk) qualified for the European Champions League by finishing fourth in La Liga. This week they beat SSC Napoli to qualify for the group stages of the tournament for the very first time.

The best Basque players in the world – Alonso, Llorente, Martinez, Illarramendi and Azpilicueta play for the biggest teams in the world – Real Madrid, Bayern Munich, Juventus and Chelsea – paying fees and salaries well out of the reach of Athletic Club.

So how does Athletic Bilbao continue to win in an unfair game – that makes Moneyball look like a walk in the park? There are no drafts, or collective bargaining, or profit shares or luxury tax in football (sorry, soccer).

They built the world’s finest youth academy system. Without the best youth academy system (or ‘cantera’ as it is known in Spain) they would die. They do it, because it is their only choice. They say necessity is the mother of invention – but that doesn’t go halfway to convey the importance of Athletic Bilbao as a symbol of the Basque people.

Is it necessary for the Yankees to have a good farm system, or Chelsea FC a good youth academy? No of course it’s not – because they can go out and buy any talent they need. Chelsea haven’t developed a regular first team player from their own academy since John Terry almost 20 years ago (and he joined from West Ham). The Yankees have generated only 38 home runs from 1st round draft picks since Derek Jeter in 1992 – and 32 of those were scored by one guy.

Innovation doesn’t need millions of dollars, or designer bearded boy-men drinking expensive coffee in designer sandals; it needs an authentic do or die situation. A lack of budget presents a greater sense of urgency than deep pockets. A burning platform is more likely to generate creative disruption than strong quarter on quarter growth trends. Steve Jobs’ return and subsequent turnaround of Apple was do or die.

So why is it that those with the least resources are most adept at innovation? Some of the companies with the biggest R&D budgets in the world have failed – Kodak, Blackberry, Nokia and Xerox to name a few from a very narrow sector. In 2009, Motorola spent more on R&D than Google. Unencumbered with former glories, or profitable business to defend, startups represent the major thrust of innovation because that is all they have. Yet, many big businesses seem to prefer slow, but terminal and inevitable decline. In recent months commentators have suggested that an increasingly diverse list of things is in terminal decline – Tesco, town centres, Manchester United and the UK – none of which are in a position to innovate their way out of trouble. That 6th century BC raconteur Sun Tzu once quipped: “A slow death is a death nonetheless”.

When you don’t have options, decision-making is taken off the table, and when decision-making is taken off the table, there is no fear that you might be making the wrong decisions. Accountants call that fear opportunity cost, and its consequences are called risk. Yet we ascribe far more risk to things that we have not done before than those things we have never done. It’s the human condition of familiarity bias.

To compound matters, due to the cognitive bias of loss aversion, where humans place much greater value on avoiding losses than generating gains, we favour the path of least risk. Risk aversion in marketing is a risky proposition. The primary role of marketing in a business is growth. So if your decision making is focused on minimizing risk, by definition you cannot be maximising growth.

It is inevitable that Athletic Bilbao have the best cantera in the world of football. It is the only path to success. It is equally inevitable that the Yankees or Chelsea are terrible at youth development. If you want to consistently and successfully innovate in marketing, you need to embrace innovation as your philosophy. Innovation is not the NPD department. It is not that top secret Project Phoenix Omega. It is a strategy designed to maximize growth by embracing the risk where others fear to tread. It is seeing that risk as the reason why returns are so high, not as a barrier to entry. For Athletic Bilbao there is no risk in their strategy because it is the only path open to them. There is no alternative. No opportunity cost. No fear.

2 thoughts on “The Guardian: What Athletic Bilbao can teach brands about risk and innovation”