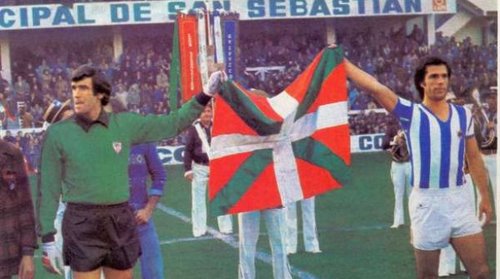 Sorry for the short notice, but all are invited to join us at the Basque Center for this year’s Athletic de Bilbao vs. Real Sociedad derby!

Athletic vs. Real Sociedad games are always special for both teams and their fans. Similar to the Bronco/Vandal rivalry, supporters of either team would NEVER leave their wagon to get on the other team’s. Both teams could use the victory tomorrow, with Athletic ranking a little bit higher at number 10, while Real Sociedad is struggling to rise up from number 15.

Boise, being the huge Basque community is it, wants to call upon all Athletic and Real Sociedad fans to come watch Athletic win the Euskal Derby on Sunday, December 14, at 1:00 p.m. MST. The Basque Center will open its doors at 12:30, to allow time for soccer fans to come in and warm up before the game.

Don’t forget to bring a dish with you, as we are also planning a potluck to enjoy some munchies while we cheer on our teams.