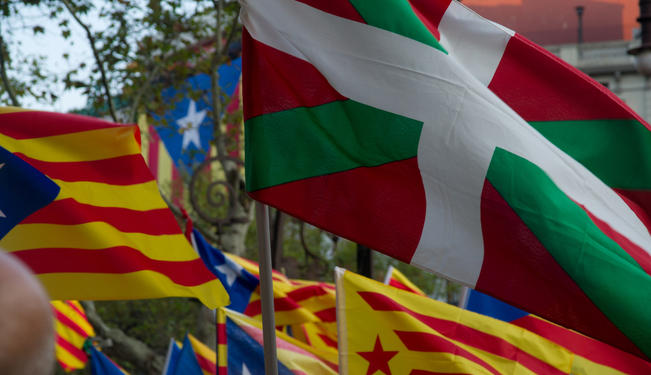 Teams from both the Basque Country and Catalonia traditionally play games during La Liga’s winter break each year, with recent opponents including Venezuela, Tunisia, Argentina and Nigeria.

Although the fixtures are not recognised by FIFA or UEFA, current players including Xavi Hernandez, Cesc Fabregas and Gerard Pique have played for the Catalan side, while Xabi Alonso, Iker Muniain and Javi Martinez have featured for the Basque team during their careers.

This year’s meeting is likely to be especially resonant given the current push for independence in Catalonia, although the statement announcing the game said it had been organised to mark 100 years since the first fixture between the two sides.

“The Federacio Catalana de Futbol and the Basque FA [Euskadiko Futbol Federazioa] have agreed to play a friendly game on Sunday, Dec. 28 at the new San Mames,” the statement read. “The game will serve to commemorate the centenary of the first meeting between Euskadi and Catalunya, which was played on Jan. 3, 1915 at San Mames.”

The Basques won that first meeting 6-1, with legendary Athletic striker Rafael Moreno Aranzadi — better known as Pichichi — among the scorers for the home team.

This was Euskadi’s first game, however, a Catalan national side had previously played its first international match against France back in 1912. A collective Spain side did not compete internationally until the 1920 Olympics, when Pichichi also featured.

The last meeting between Catalonia and the Basque Country was also played at San Mames in January 2007, with current Stoke City forward Bojan Krkic and Athletic’s Aritz Aduriz both scoring twice in a 2-2 draw in front of 40,000 fans.

(Original article from Diario As)

Nine players from FC Barcelona have been called by Catalunya coach Gerard López for a Christmas friendly against the Basque Country regional team at San Mamés on Sunday 28 December. Gerard has included four RCD Espanyol players in the team, two from Sevilla and Celta as well as players from Celta, Red Bull Salzburg, Villarreal, Real Sociedad and Getafe.

Athletic Club and Real Sociedad are well represented in the Euskal Selekzioa squad. Coaches José Mari Amorrortu and Mikel Etxarri have called up 10 Athletic players and six from La Real. The players will report for duty at 17:00 hours on 27 December in Lezama.