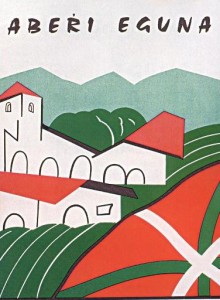 Most people will go by our house today and wonder 1) what’s that flag hanging on the door, and 2) why on earth did we put it there. But on a day where people are mostly concerned with the Easter Bunny and hidden colored eggs, I want my kids to remember that, back home, there is another, very important thing to celebrate: my home, their other home, the Basque Country.

Aberri Eguna (“Fatherland Day”) is a holiday coinciding with Easter Sunday which has its roots in the Basque nationalist movement. It was first organised by the Basque Nationalist Party on 27 April 1932 in Bilbao, then consisting of a demonstration of some 65,000 participants which terminated at the Sabino Arana House. It has since become the unofficial Basque national holiday.

The first Aberri Eguna was held to celebrate the anniversary of the concept of political Basque nationalism as put forward by Sabino Arana in 1882, according to his own writings.[1] Some claims suggest that the date was established after Arana’s death.[3] However, its coinciding with Easter is deliberate as it follows the motto of the Basque Nationalist Party Jaungoiko eta Lege Zaharrak “God and the Old Laws and the symbolism of theresurrection of Christ.[1] Ideologically, it follows the examples of the older Catalan and Galician patriotic holidays, the National Day of Catalonia(from 1889 onwards) and the National Day of Galicia (from 1919 onwards). It was then celebrated in San Sebastián in 1933, in Vitoria-Gasteiz in 1934 and in Pamplona in 1935.

From 1936 onwards, the year of the outbreak of the Spanish Civil War, it was no longer celebrated in a single location but instead in various localities on a smaller scale and under clandestine conditions as under Franco, Aberri Eguna was forbidden from 1937 to 1975. It was only freely celebrated in the Northern Basque Country under the auspices of the Basque Government in Exile.

6 thoughts on “To all Basques, home and abroad: Aberri egun zoriontsua!”