BASQUE COUNTRY, Spain – The training facility of Athletic Bilbao is scattered with soccer fields – and on this Saturday in April the club’s Under-19 squad is taking on the U-18 version in a scrimmage.

Just like the parent club, both teams consist of only players of Basque descent and usually from the provinces of northern Spain.

But there is one player whose second home is more than 5,000 miles away from Bilbao – in Boise.

“As many times as we can we try to get over there,” Ander Egiluz says. 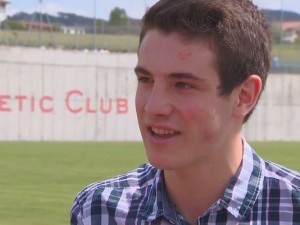 Decades ago, 17-year-old Ander’s great-grandparents moved from the Basque Country to southwestern Idaho and became sheepherders. his mom, Michelle, grew up in Mountain Home, married, then returned to Bizkaia.

Ander grew up playing soccer and a huge fan of the home team.

He also grew up going back and forth, spending summers – and even his fifth-grade year – in the states. That season he played with the Boise Nationals soccer team.

“It was very different,” he said. “It was a great experience for me, especially in sports”

Then last May he got a call from Athletic Bilbao that changed his life.

Ander was ready to spend his junior year at Capital High School, but he couldn’t pass on a chance like this.

“I had two things on my mind,” he said. “I always love the U.S. and would really like to live there, but what I thought in my mind is that 50 years from now I’m still going to have that there – but my opportunity here to play soccer was once in a lifetime.”

He is missing today’s contest because of knee surgery three months ago, but he is working his way back and hopefully up to the first team.

Another dream, almost as big, is to be back in southern Idaho someday, spending time on his uncle’s ranch in Grasmere.

“You know, I spent a lot of time with him down there and it’s just great, i love it,” Ander said. “It’s peaceful, there’s no one around. I really like it.”

As for the big boys coming to Boise this summer, Ander knows they will be in for a surprise.

“I think a lot of people from here know there are a lot of Basques in the U.S. and in Idaho, but I don’t think they see it as such a big thing and it really is,” Ander said. “I mean, you have a Basque block in downtown Boise.”