I came across an article today published over the weekend by the Daily Mail on Athletic’s fiercest striker, Aritz Aduriz. It’s always nice when one of our players gets recognition beyond our boundaries, so I thought I’d share with you guys, in case you missed it.

The Basque powerhouse of Bilbao: Why Barca-slayer Aduriz is my man of 2015

By GRAHAM HUNTER FOR THE DAILY MAIL

Not Messi. Not Vardy. Not Cristiano. Not Pep. Not Neymar. No. Ladies and gentlemen, Aritz Aduriz is my man of 2015. In the football world at least.

And you can take your pick — the roots of that title either lie in the Pyrenees mountains when the future Athletic Bilbao striker was nine years old, or in the 87th minute of the Copa del Rey quarter-final in Vigo last January.

What actually wins him this hypothetical but doubtless highly prized award? Powering his Basque-only club through to the Copa final against Treble-winners Barcelona, then taking defeat in that pulsating game as nothing other than an incentive to thrash the Catalans the next time they met. 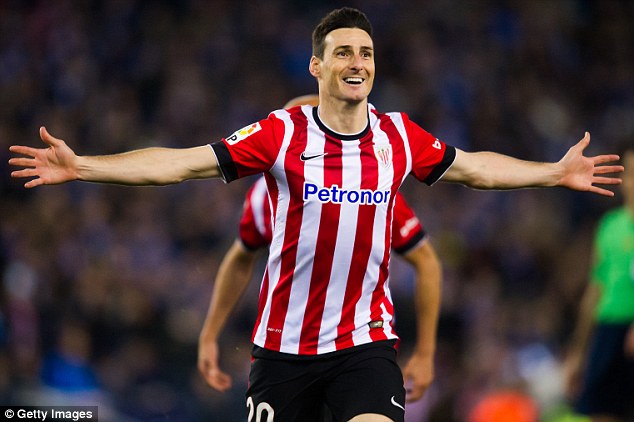 That was two months later in the Spanish Super Cup in August and, even factoring in Barcelona’s horrendously taxing trip to and from winning the European Super Cup in Georgia just a couple of days earlier, the 4-0 win which Athletic inflicted on them at the San Mames was, categorically, a gubbing.

Three days later, Aduriz scored yet again, in the second leg, for a 5-1 aggregate win over the Spanish and European champions — 80 per cent of the goals bearing his name.

Basque-only Athletic, the club which stands against the tide of anything for a win. Thanks to Aduriz, now winning its first trophy for 31 years — think about that.

Practically every notable club around Europe’s major leagues has won something during that time. But not Spain’s oldest and most idiosyncratic club.

Not bad for a guy who grew up with parents who thought football was for nancy-boys, who climbed mountains, skied down them and were pretty disgusted when young Aduriz opted to use his talented feet to kick a ball rather than traverse a white-capped, icy mountain.

Aduriz was runner-up in the Spanish national cross-country skiing championship of 1990 and grew up in a house where football was not watched on television, so he had no reference points. No heroes. 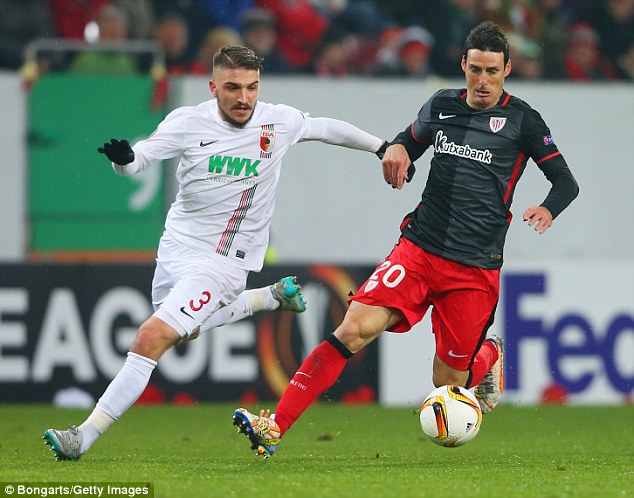 What makes every Aduriz goal for Athletic still sweeter for their fans is the fact that he was born in San Sebastian, home to Basque enemies Real Sociedad. It is where he honed his skills on La Concha beach alongside starlets like Mikel Arteta and Xabi Alonso.

So starved of football reference points was Aduriz that he only went once to La Real’s fearsome old stadium, Atocha, while growing up. But because he could show a mule what stubborn really is, he dug his heels in and informed his dismayed parents that he was going to fight his way up the football food chain… and here he is.

A legend, a hero, a winner — and currently scoring more frequently than ever with his 35th birthday just over a month away.

It is a fabulous story of determination, latent excellence, technique, humility and football’s wonderful ability to quietly bless those who work hardest. 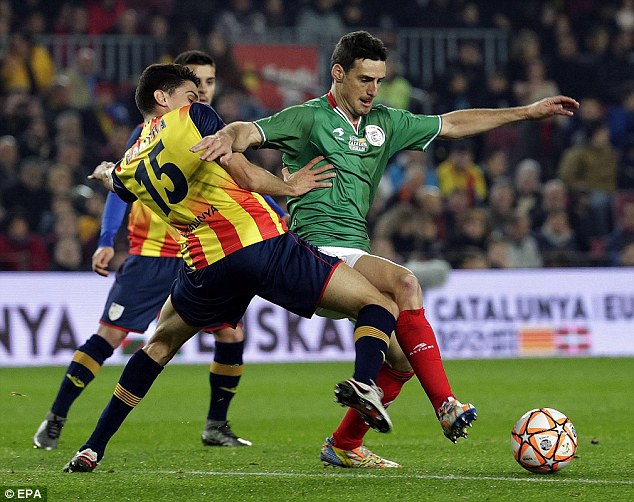 Aduriz admits: ‘I love all sport. I was a runner-up in the Spanish national cadet skiing championships. I’ve done snowboarding, surfing, tennis. They all helped me improve my co-ordination, although nowadays I stick to golf. It’s less dangerous.

‘My mum and dad were very sporty but they were never into football. I remember I had to persuade them to let me play and even then they insisted that I prioritise surfing over soccer.’

Growing up at the Antiguoko club in San Sebastian, neither of the two big Basque teams fancied him. At least until he scored twice for Aurrerá in a 3-2 away win at Lezama, the hallowed Athletic training ground.

Signed almost immediately by Los Leones, he was given his debut in 2002 by Jupp Heynckes, the brilliant German ex-striker and serial winner as a coach who brought Bayern Munich their first ever Treble.

It was Heynckes who, in a slightly maladroit attempt to contextualise Athletic’ s Basque-only policy, described what they were trying to do as racing a ‘VW Beetle against Porsches and Rolls Royces’.

His point was that Athletic were low budget, hard working, reliable but not prone to vast expenditure.

Misinterpretation led to opprobrium for the German from the Basque media. But low budget, hard-working, reliable: that’s Aduriz. 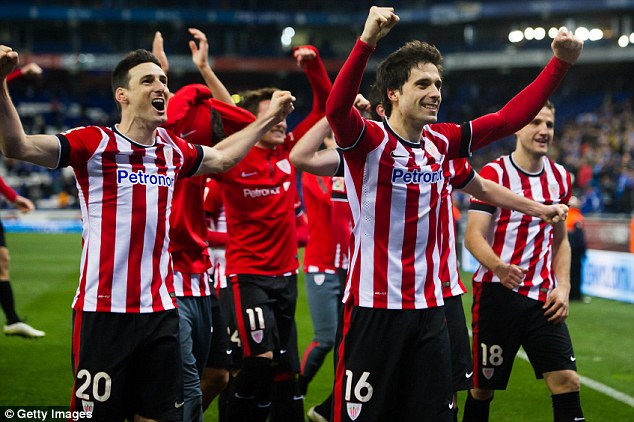 ©Getty Images| Aduriz (left), with Xabier Etxeita, has been in the form of his life at the age of 34

He was loaned to Burgos, sold to Third Division Valladolid, bought back, sold for €5million to Mallorca — at which point the San Mames fans protested and held a grudge against the Athletic president which, in due course, cost him his mandate.

Not until 2012 was he bought back, from Valencia, and earlier this year he scored his 100th goal for Los Leones.

Remarkably, coaches often told him ‘that my biggest flaw is that I always prioritise the team. Apparently I’m just not selfish enough and am always trying to help my team-mates out.’

What do coaches know?

So, to Vigo last January. Aduriz’s high-tension penalty with three minutes left sealed a 4-2 away win.

The San Mames semi-final first leg should have ushered Espanyol straight into a Camp Nou final against Barça.

They battered Athletic. But Aduriz scored, for an unmerited 1-1 draw, then added another in a 2-0 away win in the second leg.

That placed Athletic in the Copa final, which would qualify them for the Supercup in August. And his historic four-goal haul.

Which evokes my favourite quote from this wonderful, old-school centre-forward.

Recalling the first time he ever experienced San Mames, Aduriz reckoned: ‘With Athletic, well, once I got inside that stadium, I saw that we could compete with anyone. We could take on the whole world, like Asterix and Obelix did.’

By Toutatis, he has.