Loreak, released in the US as Flowers, is a 2014 Basque-language Spanish drama film directed by Jon Garaño and Jose Mari Goenaga.

It premiered in the Official Section of the 2014 San Sebastián International Film Festival, and it became the first Basque language film nominated for the Goya Award for Best Film. Loreak was selected as the Spanish entry for the Best Foreign Language Film at the 88th Academy Awards, being the first Basque language film to do it, although it didn’t get the nomination.

The movie tells the story of Ane (played by Nagore Aranburu), a woman in her early forties who does not feel fulfilled. Her life changes when she starts to receive bouquets of flowers at home anonymously, once a week. The lives of Lourdes (Itziar Ituño) and Tere (Itziar Aizpuru) are also altered by some mysterious flowers. A stranger leaves flowers every week in memory of someone who was important for them. 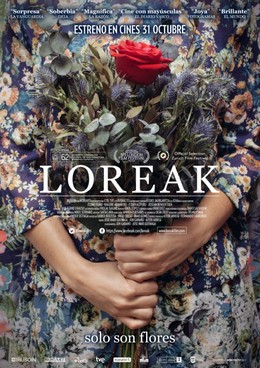 You now have the opportunity to see this wonderful film at the The Flicks in downtown Boise. It is the first time The Flicks will show a movie Basque (with English subtitles).

And if you feel like mingling with your friends before the Boise Premier, head over to the Basque Museum & Cultural Center prior to the movie for pintxos and wine during social hour.

For more information visit The Flicks, the Basque Museum & Cultural Center, and Wikipedia.