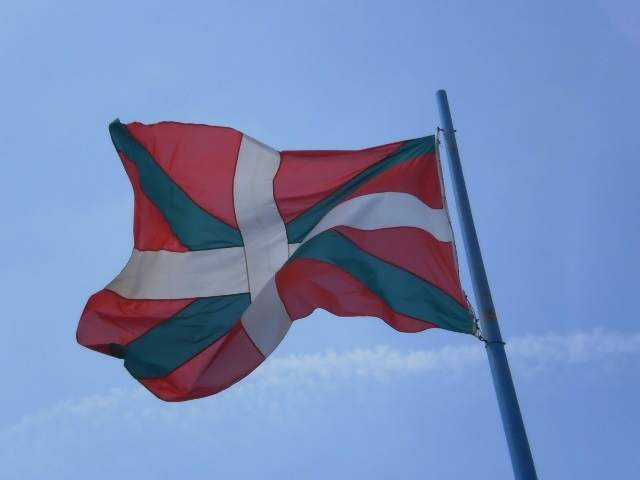 Well, this is the stupidest thing I’ve heard since Donald Trump announced his candidacy to the US presidency. Unbelievably, both are true. Eurovision has released a press notice with the Flag Policy for this year’s contest that will take place in Sweden,  which places the Basque flag (the ikurrina) in the list of banned flags, alongside the flags of ISIS, Transnistria, Donetsk, Nagorno-Karabach and a few others.

To say that I’m in shock doesn’t fully explain how I feel at the moment. I can’t get over the fact that, after all the struggles endured by the Basque Country to recover a flag banned for years under Franco’s dictatorship, it has once again been dragged through the mud for no apparent reason.

Unsurprisingly, there has been an uproar among Basque media outlets and politicians, urging Eurovision to reverse their decision. The Basque president Iñigo Urkullu has twitted that he will contact the Swedish embassy in Spain about the matter, as will EH Bildu, the second largest Basque political party. Urkullu has also mentioned the offensive character of displaying the Basque flag alongside the ISIS flag as if somehow they were equals.

You can read all about this infuriating news below.

Eurovision bans Basque flag alongside that of Isis terrorists

The popular singing contest has banned the flag of the Basque Country, angering politicians who have demanded the “boycott” be lifted.

Spaniards in the northern region of the Basque Country are angry after the Eurovision Song Contest banned the region’s official flag – theikurriña – alongside that of Isis.

“It seems incredibly unfair to us to include the ikurriña on the list of banned flags,” MEP for the Basque Nationalist Party Izaskun Bilbao Barandica told The Local on Friday.

“The ikurriña is a constitutional Spanish flag, just the same as the flags of Catalonia, Galicia, Andalusia… and the other 17 Spanish Autonomous Communities,” she added.

Barandica is leading the call for the Eurovision Song Contest, to be held this year in Stockholm on May 14th, to reinstate the Basque flag, arguing that banning it is not in keeping with this year’s slogan: “united in diversity”.

“The banning of regional and local flags in itself does not seem to be compatible with the slogan, but the inclusion of the Basque flag on a blacklist together with that of the Islamic State is incomprehensible,” the MEP wrote in a letter sent out to Tibor Navracsics, the European Commissioner for Education, Culture, Youth and Sport.

The letter is calling on Navracsics to contact the Swedish authorities and ask that “they formally end this boycott”.

Barandica confirmed to The Local that she had also sent the letter to the Swedish and Spanish ambassadors to the EU, the Spanish minister for European affairs and the 20 Swedish MEPs in the European parliament.

The flag policy document shows the banned Basque flag above that of Isis.

“The ikurriña is the official flag of Euskadi, one of Europe’s oldest nationalities,” she writes in the letter, explaining that the flag and other Basque symbols were banned under Spanish dictator Francisco Franco and were only recently recovered after “decades of democratic, civil struggle”.

“The inclusion of our flag on a list of specifically banned symbols, and its comparison with the flag of the so-called Islamic forces is en error that one would not expect of a country with the standard of education and democratic track record of Sweden.

“It is an offence to all the people of the Basque Country,” she added.

The Eurovision Song Contest’s flag policy includes the banning of “regional flags”, yet includes only the Basque flag among the banned regional Spanish flags – not the flags of other politically charged regions such as Catalonia.

But speaking to The Local on Friday, Eurovision spokesman Paul Jordan said the aim was not to single out specific territories.

“The European Broadcasting Union aims to assure that the Eurovision Song Contest is free from political statements, unauthorized commercial messages and offensive comments,” he said.

“It is important to state that the flag policy is not aimed against specific territories or organizations, and certainly does not compare them to each other,” he added.

The Eurovision spokesman also confirmed that the document initially posted by the venue was a draft and the official list would be posted later on Friday.

“If the portraying of the flags in the document has offended anyone, we of course apologise for that,” he told The Local.

Both the Catalan and Basque flags have been linked with their regions’ growing independence movements, with the Basque flag also used by separatist terror group Eta during their violent campaigns.

Other banned flags include those of Palestine, Crimea and the Islamic State.

(The original article can be found at http://www.thelocal.es/20160429/furore-as-eurovision-bans-basque-flag-alongside-isis)