The Song of the Basque was a Basque musical production developed by Jay Uberuaga Hormaechea for the Boise Music Week in 1949. The success of the first night was so great that many people could not get in the auditorium of Boise High School. The night after the first show on May 8, 1949, the Music week director asked Jay to repeat the show on May 18. The next year it would be repeated again and a record of the show was made.

Song of the Basque was not simply a successful show, according to Professor Dave Lachiondo, “It was the definitive and unanimous recognition from the Boise community of the Basque presences in Idaho.” 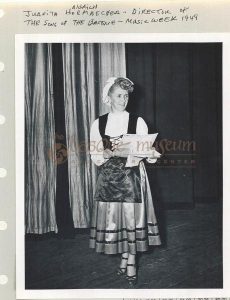 Jay Uberuaga, Chairman of the program. (Courtesy of the Basque Museum)

The first Basque dance group in Idaho was created in Emmett in the 1940’s due to Basque parents’ concern about the inability of younger Basques to perform ethnic dances. During those years, the annual Sheepherders Balls, and other dance performances were coming into play, like the International Program presented by the Columbian Club. By 1948, Juanita Uberuaga Aldrich Hormaechea, known as Jay Hormaechea, started giving dancing lessons to the Basque children of Boise. Later on these children would grow to become the first Oinkari dancers. Through those early efforts, Jay was the key to the future of Basque dancing in Boise and surrounding areas. She was also the first to produce an entire dancing and music performance for the Music Week Festival with the entire Basque community of Boise taking part. 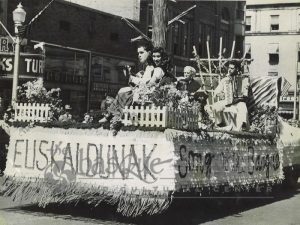 Float in the 1949 parade (Courtesy of the Basque Museum)

The production was directed by Juanita Uberuaga after her experience teaching traditional dances to Boise’s Basque youth. However, without the help of many Basque protagonists, the show would not have been possible. Pete Leguineche served as narrator for the show and a very young and talented Rosita Alegria, daughter of the later famous broadcaster, Espe Alegria, painted the backdrop.

Among the performers were Mrs. Phil Uberuaga as a soprano, Miss Angela Bicandi  and Miss Valen Letemendi on accordion, Antonio Villanueva and Ramon Aspiri on trumpets, the brothers Joe and Domingo Ansotegui, the Ysursa and the Anchustegui families, playing and singing well-known songs, Joe Anacabe, the Murelaga sisters with four year old Mary Murelaga singing and Josephine on accordion, and also Henry Alegria with his wife Espe. A special young men’s group called Los Borrachos was made up of Tony, Louie and Jimmy Jausoro as well as Julian Lachiondo, Johnny Elorriaga and Ramon Echevarria.

Although these were the most notable performers the entire cast of 200 performed with style and enthusiasm and credit was also given to those who worked behind the scenes to make the show possible.

A Basque parade on the streets of Boise with floats, dancers and musicians kicked off the performances both in 1949 and 1950.

For the complete history, pictures, and audio recordings from the performance, check Song of the Basque at The Basque Museum and Cultural Center’s webpage.

2 thoughts on “Song of the Basque, an article from The Basque Museum & Cultural Center”