I was going through my drafts this morning and came upon this bit I wrote back in March of 2015. I don’t know why I never published it. I still feel the same about Andoni. He’s about to turn 13, but I gotta say, hasn’t changed that much. I wonder if, after so much waiting, the jump to adolecense will eventually catch me by surprise. I’ve been preparing for this heartbreak since he was born, though. That’s gotta help. 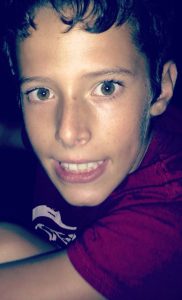 My son stopped by the house last night, tired and sweaty after biking all the way from downtown. He had finished the scarf he was knitting for me, and he wanted me to have it before the weather gets warmer. He didn’t have much time to spare because dinner was waiting for him at aita’s, but he did stay long enough to sit on the couch and ask about my day (Did I have a good time with my girlfriends?), and weather Spring Break was actually a break or just a regular work week for me.

Other times, when he can’t visit, he’ll call to ask me those very same questions. In a world where everybody favors texting, getting a call from the (little) man you love is not something to take for granted. I understand that he’s only eleven and I am his mom, but pretty soon his eyes will wander and mom will no longer be first on Andoni’s speed dial. By the time he becomes a real teenager I will only have these memories to fall back on, so I plan on making as many as I possibly can.

It’s not so obvious in Boise, but I can see it happening already when we go to the Basque Country. As soon as we  arrive in Ortuella I instantly go down on his priority list. Aitzol will trump me every time. Next come the park, spinning tops, and soccer balls. He’s got no phone over there, so I have to drag him away from his friends virtually every day at dinner time, listening to him complain all the way home that he was only able to play for 6 hours.