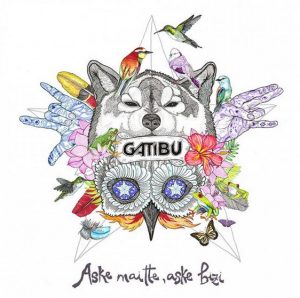 Gatibu, my favorite Basque rock band, presented their new single today on Gaztea radio. It’s called ‘Nire ondoan bazina’ (If you were by my side), and part of their upcoming album ‘Aske maitte, aske bizi’ (Love free, live free), which will be available at Durango’s Fair.

‘Nire ondoan bazina’ is an emotional song about the pain of being away from the person you love, and the inability to build a life together. It could be taken as a protest against the dispersion of Basque political prisoners, as the group has sang about similar issues before: ‘Ihes‘ (Run) and ‘Ez dago barroterik‘ (There are no iron bars) are a couple of examples.

Music, however, is a form of art, and art is in the eye of the beholder. Although this song might be political in nature, there might be other interpretations. People can become prisoners in many ways. They might build walls out of fear, out of anger, for self-preservation, and those can be as effective at keeping people out as a wall made of brick. And distance does not necessarily have to be physical. Two people can be in the same room, but worlds apart.

In any case, no matter what spin you put on it, I’m sure you’ll love it!

I will soon have the lyrics in Basque and the translation to English up on the post. I can’t wait for the rest of Gatibu‘s album!

(Even though the link shows crossed off, it works!)

2 thoughts on “Gatibu’s new single, ‘Nire ondoan baziña’ (If you were by my side) is out and, as always, amazing!”