The 20th Edition of Korrika will take place March 20-April 9th, and this year will travel from Otxandio (Bizkaia) to Iruña (Nafarroa). The event organized by AEK (Basque acronym for Coordinator for Basque Language and Literacy) takes place once every two years to create awareness of the Basque language and raise funds to support AEK centers of instruction.

Many Basque entities in the Diaspora organize Korrika events in solidarity with those in the Basque Country, and Boise is definitely in the list.

Wear red, white, or green in support of Euskera! 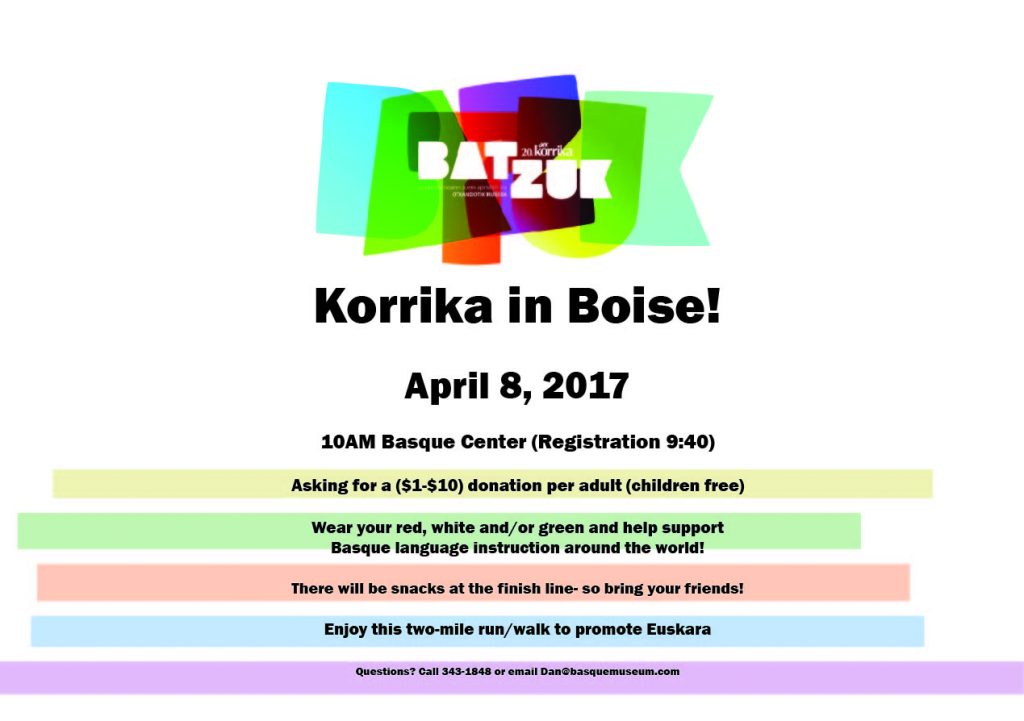 A LANGUAGE, A CULTURE, A WORLD

Basque is a language, a culture, a way of life: the language of our land, our cultural heritage – a way of being and living in the world.
For years now, we Basque speakers and lovers have been on a mission to strengthen our language, with our sights set on a better future.

YOUR LANGUAGE, YOUR CULTURE, YOUR WORLD

Korrika 20 reaches out to you with an invitation to discover Euskera, the Basque language, and to join us in using it. So that you too can enjoy the wealth of language and universal cultural diversity, by learning, talking, paving the way for others…

AEK has the ultimate aim to see everyone in the Basque Country speak Basque and thereby fulfil its dream of achieving a plural, diverse world. It also wants all languages and their speakers to live in the Basque Country in equal conditions. It’s a question of justice: the survival of minority languages and defence of the rights of those who use them. We believe in the need to take care of and protect Euskera, the Basque language. Basque must be developed in equal conditions, day by day and in all areas of life, so that everyone, men and women alike, may live in equal conditions, every day and everywhere.

I, you, he, she, we, you, they… it’s important to join forces and do your bit: my language, your language, our culture, our cultures, this world, these worlds. At the end of the day, supporting a language means taking a stance in favour of all languages; in favour of universal culture. We invite you to join the celebration for language equality. To help create a more universal world.

Korrika is organised by AEK, an organisation with the mission to recover Basque and revive the language among the people of the Basque Country. To achieve its objective it teaches Basque language and literacy to adults, also working in other areas such as the research and publishing of educational material, teacher training, organising cultural activities and programmes to encourage Basque use, designing and implementing plans for regularised introduction of the language to companies and institutions, and organising awareness campaigns.

The first Basque literacy groups were created around 1965, when the first campaign was launched to recover the Basque language. As more and more groups took shape, while continuing its work in the field, AEK also started to promote teaching for people interested in learning the language. That mission, unchanged today, led, with the backing and support of Euskaltzaindia (Academy of the Basque Language) to the creation of the first evening schools or gau-eskolak, followed by the euskaltegis or Basque language schools. Today, AEK is one of the most important organisations in the field of teaching the Basque language and its literacy to adults, with over 100 schools and more than 500 teachers, offering support in drawing up plans to introduce the language and programmes to encourage its use. AEK also provides a translation and correction service and publishes the magazine AIZU!

One exciting thing we’ve noticed since the last edition of Korrika is the huge social response to the initiative. On the one hand, more and more people are choosing to use the Basque language in their everyday lives following the call to Basque speakers launched in Korrika 19. But also refreshing is the increasingly greater numbers of people who are coming to our schools to learn Basque. However, as far as public funding is concerned, the euskaltegis still do not receive the financing they need. In the Autonomous Basque Community the situation is not yet regularised, although progress has been made; in the French Basque Country (Iparralde), subsidies have increased, but not to the extent required by teaching Basque to adults, and in Nafarroa (Navarra), despite the darkest years having come to an end, the steps taken to date have been small. It is essential to accelerate the teaching of Basque to adults that is so badly needed, and for greater investment to be made. That’s why all of the funds raised for Korrika 20 will go towards helping the AEK euskaltegis.