Boise, Idaho (April 13, 2017) — The Basque Museum & Cultural Center is opening a new exhibit on April 26. Gernika Gogoratuz – Remembering Gernika will commemorate the 80th anniversary of the Bombing of Gernika, a horrific event that arguably led to the surrender of the Basque Country during the Spanish Civil War. The anniversary will be marked by a discussion panel let by David Lachiondo, PhD. and will include survivors and eyewitnesses of the day’s horrific events. They will give their accounts of their time growing up in Franco’s Dictatorship and their experiences during the market day on April 26, 1937.

We will follow up the discussion panel with a commemoration of the 80th anniversary at the Basque Museum (611 Grove Street) with participation by the Biotzetik Basque Choir, Oinkari Basque Dancers, and representatives from other Basque organizations in Idaho. Finally, we will observe a moment of silence to honor all those that perished that fateful day and then open the Basque Museum & Cultural Center’s exhibit “Gernika Gogoratuz: Remembering Gernika”.

On April 26, 1937, the small town of Gernika was busting at the seams for their weekly market day when German aircraft flew overhead dropping incendiary bombs on the quiet town. As people were running for cover, planes came back around and gunned those down that the bombs may have missed. It took more than 50 years for Germany to take responsibility of this devastating event, and it is to be argued that Spain have yet to acknowledge their involvement. The city of Gernika is now a thriving city full of vibrant culture & history and is now home to the Peace Museum & considered by some the Peace Capital. Through the exhibit at the Basque Museum & Cultural Center, we will share not only the tragedy & triumph of that small town, but also the impact it had around the world, especially in the United States.

The Basque Museum & Cultural Center’s mission is to preserve, promote and perpetuate Basque history and culture. The Basque Museum also hopes to educate about the Basque history and culture in the Basque Country as well as their migration and influence on both the sheep industry and the general cultures and traditions of the western states they called home. The Basque Museum & Cultural Center is located at 611 W Grove Street in downtown Boise. Hours are Tuesday through Friday 10am to 4pm and Saturday 11am to 3pm. For more information, visit basquemuseum.com.

We invite anyone interested in learning more about the bombing of Gernika and the significance to the culture and this Idaho community to take part in this event. 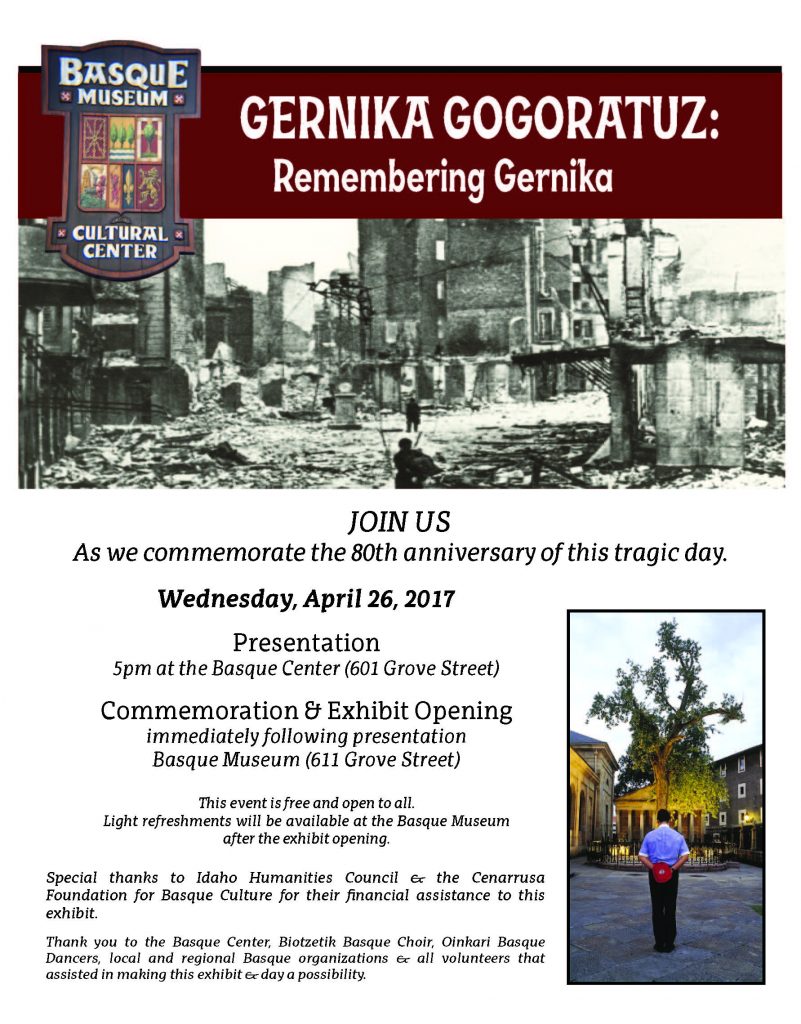 One thought on “The Bombing of Gernika: 80th Anniversary Commemoration and Exhibit Opening at the Basque Museum & Cultural Center”