(The following is a translation from an article originally published in Spanish by El Correo on June 16, 2017, and the video was published on EITB’s website on June 14, 2017. I apologize in advance for any mistakes. It was a somewhat long article, so I decided on a collaborative effort between Google Translate and I.)

Iratxe Gómez, a native of Zamudio residing in Vitoria, is behind Apple’s remote assistance service for its mobile devices and several GPS devices

“Siri, where are you from?” “Apple designed me in California,” says the application in a monotone voice. But the truth is that the voice providing remote assistance services in iPhone and iPad devices was born in the Biscayan town of Zamudio 43 years ago. Her name is Iratxe Gómez, and her warm and cordial diction has made her the most frequent interlocutor in telephones, cars, and many other remote assistance services throughout the country.

For a long time, Iratxe completely ignored that millions of Apple users were talking to her every day. When you record locutions or allophones ―the sounds with which a computer then constructs words― you generally do not know what your final destination will be. One day, watching television, a magician did a trick in which he used one of the brand’s phonesas an assistant. Hearing the voice on the iPhone, she discovered it was her own.

This English teacher living in the outskirts of Vitoria and who has been unemployed since May, has been making incursions into an activity that, although part of our daily life, it is still a stranger. Initially, her mastery of languages landed her a jobs in a call center for international mailings or in an online banking service, where she made locutions in Spanish and English.

Later, she helped develop an automated text converter, and from there she went on to put her voice on GPS systems for high-end vehicles. “They wanted it to sound more natural.” Years later, her husband bought a new car and what was his surprise when he realized that it was his wife who gave him directions. “Now he turns off the navigator to avoid putting up with me twice,” she jokes.

The same company that set up millions of combinations to guide drivers, then ‘sold’ her voice to Apple, who incorporated it into their devices for Spain. In the transaction she did not see a dime, although her voice is now infinitely more popular. “I was a bit puzzled, but the company argued that my copyright had expired.” With or without compensation, she is now the most frequent interlocutor of millions of Spaniards.

“I find my voice everywhere.” When she calls to make an appointment at the doctor, she hears her voice. Same thing when calling for information on taxes. “When my sister-in-law enters the garage, she ‘talks’ to me.” The list of anecdotes is endless. “Living in China, I did not master the language and sometimes I got stuck. Once, the person I was talking with pulled out their cell phone to translate something into Spanish with a voice application and… it was me! ”

What’s so special about her voice? She does not know for sure, but she remembers that her vocal talents have always impressed others. It may have something to do with her being raised in her mother’s sewing workshop, where the radio was constantly on. “I was always struck by the way the old broadcasters spoke, the radio soap operas,” she recalls. By the time a teacher first put her to read in class, her diction left him in awe.

“I’ve always been told that I read very well, but I did not think any of it.” Iratxe has earned her living mainly as an English teacher. “But it’s true that the younger students fall asleep when I read a story to them, I imagine they like it because it sounds soothing, calm.” And that’s what a remote assistance service looks for. Listening to her in the car or on the phone, her six-year-old son “believes that in every home things have the voice of the mother, who knows everything.” He still does not know that his mother is Siri. 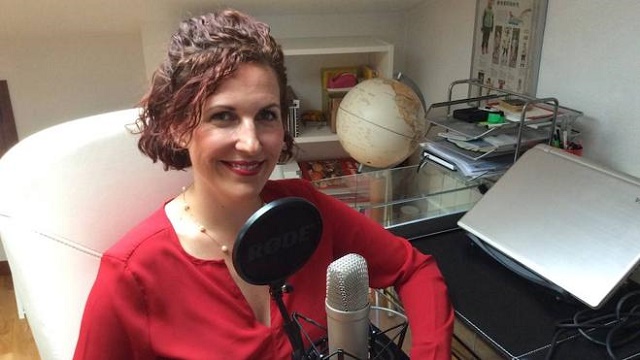 2 thoughts on “Siri’s voice (in Spanish) is Basque!”