What can one write about a match which had it all? At stake in this titanic struggle in Eibar was none other than a place in the final of the Pairs Championship for 2009, the culmination of a tournament which started in January and is still going strong. Both pairs wanted the prize more than they could express. Even as the players were presented to the crowd and the coin was tossed to determine serve, the protagonists looked liable to explode with tension, variously jumping and flexing their muscles like prize fighters preparing for mortal combat. But passion and desire must meet with composure and nerve to produce a winning formula and the partnership who found a way to create this mixture would win the day.

In Juan Martinez de Irujo and Oinatz Bengoetxea, this game featured two of the most volcanic and fearless forwards in the game and the two Navarrans went for each other hell for leather from the first service to the last. The first four points were a flurry of attacking brilliance featuring all four players in mesmorising harmony. When Irujo hit low from close in to the frontis, he appeared to curse the world and everything in it; that one point could elicit this reaction indicated the path the match would take. Tension boiled over again with the score at 3-2 to Bengoetxea and Beloki when a ball from the former appeared high. An enraged Irujo protested mid point with arm waving fury before remembering the need to play on. The point was won when Bengoetxea hit low; open warfare may well have ensued had it gone the other way. Bengoetxea too was in a high octane state, both in his ferocious striking of the ball and his general demeanour, not least when a miscue led him to hurl the ball against the wall in abject frustration. The defensive battle, while less vocal, was every bit as intense with both Beloki and Goni pulling off miraculous long range strikes almost at will, to the thunderous applause of the Astelena crowd. Surely something had to give?

At 10-10 the pairs appeared glued in fierce deadlock and there was a growing sense that someone had to impose themselves on the game if glory were to come to them. Two Bengoetxea miscues gave Irujo and Goni an opening which one felt could have been the start of a surge of both confidence and points for the pair in blue but a low hook from Irujo and a beautifully executed smash into the corner from Bengoetxea dispelled that notion. Two points followed in which the defensive play of both sides was jaw dropping. As the forwards were forced out of position their places at the front were taken by Beloki and Goni who found themselves duelling at the frontis while Irujo and Bengoetxea chased and dived in a mesmerising ballet of action. When Goni slipped and failed to retrieve a long ball, some may have been led to believe that the gods of pelota would smile on Bengoextea and Beloki who eased ahead with the finishing post in sight. However, Irujo, sensing last chance saloon, stepped up to the plate. With the aid of a smattering of errors from his opponents, 14-16 became 18-21 and a brutal smash won the day. Irujo kept his head at the death while a desperately tense Bengoetxea let the victory slip from his grasp by attempting to hit winners too hastily. Perhaps experience told for Irujo, who has been here so many times before. Passion coupled with composure is indeed the perfect recipe.

So, Irujo and Goni are through to the final but will have to wait for next week to learn the identity of their opponents. Bengoetxea and Beloki may yet be there themselves, with the chance to overturn this result on the biggest possible stage; they have proved they have the potential. In their way stand Aimar Olaizola and Oier Mendizabal. The form of the defending champions has been rather less than consistent but Mendizabal was white hot on Saturday, and to quote Irujo, Aimar is Aimar. Everything is on the line. 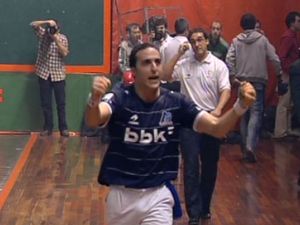