After nearly three months of competition and 38 matches, two elite pairs have risen to the top and won the right to face each other in what should be a pulsating final at Atano III on Sunday. In a match which was sold out within the hour, defending champions Olaizola II and Mendizabal II will take on Martinez de Irujo and Goni III for the ultimate prize.

Aimar Olaizola and Juan Martinez de Irujo face each other in a major final for the fifth time in their stellar careers and the forward battle between the two great rivals will have the word of pelota on the edge of their seats once again. Irujo had been in imperious form of late, cruising through the semi finals and getting the better of three of the very best in the process. He played last weekend in an effort to hone his form ahead of the crunch match and hardly broke sweat in driving Titin into the ground. Afterwards he expressed a desire for the final to come quickly; he is in quite some shape, both mentally and physically. Olaizola has never been quite at his brutal best in this competition, hampered at various times by back pain, sickness and tendinitis in his right shoulder which has prevented him from fully cutting loose. However, there have been flashes of brilliance, notably courtesy of his famed left arm, and he has shown his customary skill in reading and dictating matches, seizing the initiative when the chips are down. Much will depend on who can exert their authority in the early points. If Irujo hits his stride early, it will take all of Olaizola’s composure to rein him in. Similarly, if Olaizola gets his nose ahead, Irujo may be liable to wobble as he did in the Cuatro y Medio final in December when he never recovered from going 5-0 down to the Goizuetan. It is all or nothing for these two gladiators of forward play.

Despite the fact that most eyes will be trained on the forwards, matches are often won or lost from the back of the fronton and the long range duel of Mendizabal and Goni has the potential to be every bit as enthralling. Goni has been the epitome of solidity throughout the tournament, the perfect foil for the attacking might of Irujo. The man from Zubiri, winner of three pairs txapelas in his long career, has undoubtedly been the more consistent of the two of late but his opponent, almost ten years his junior, has raised his game beyond all recognition in past weeks. His striking from the back of the fronton has been mesmerising and his maturity in controlling points admirable. If Mendizabal can maintain this form, Goni may well have his hands full.

So, who has the crucial edge? Irujo and Goni must start as favourites due to their excellent form in the semi final rounds, where they remained unbeaten. Irujo is on fire at the moment and it is hard to envisage him losing his way. However, he has been known to be erratic when the pressure is on. Which Irujo will we see on Sunday? Olaizola and Mendizabal have been beaten twice by their final opponents already in this tournament but did manage to beat them in the course of the quarter finals, in a game where Olaizola clearly had the upper hand. Question marks remain over Olaizola’s fitness but if he and Mendizabal can play as they have at times, the celebrations could well be theirs. Tune in to ETB-Sat on Sunday to watch the drama unfold. 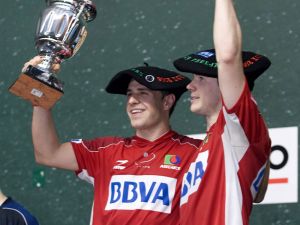 Can Aimar and Oier defend their crown?