It is three years since Juan Martinez de Irujo last contested a Manomanista final but at Atano III on Sunday, Ibero’s most cherished son returned to the big time with his defeat of defending champion Oinatz Bengoetxea in a pulsating match. Both are pelotaris who wear their hearts on their sleeves and as promised, served up a contest of breathtaking exuberance and intensity. The desire of each was palpable but there could only be one victor and for all his speed and dynamism, Bengoetxea was unable to match Irujo for sheer skill and devastation.

Irujo began as he meant to go on, opening up a 6-0 lead, hitting the fronton like a whirlwind. 6-0 became 8-1 and 11-2 and many of the extremely vocal fans who had flocked to San Sebastian must have wondered whether they would see a contest. However, Leitza’s faithful lifted Bengoetxea, who is nothing if not a fighter, to parity at 11-11. But parity of scoring does not always tell the whole tale, and Irujo was keen to impress the fact of his superiority. Moving the ball with lethal speed, he wrenched the initiative from the champion, winning the next six points to proceed to 17-11. Bengoextea stemmed the tide with sotomano and hook winners to claw two points back, but none could now doubt the identity of the master. He surged ahead again to 21-15, while all hell broke loose among his supporters, and took the tie at a canter with a stinging forehand winner. In a blitzkrieg of 15 winners, Irujo was in the final again.

This will be Irujo’s third championship final of the year, having previously lost the Cuatro y Medio final in December before winning the Pairs. It was Aimar Olaizola who defeated him in December and that same player could equal Irujo’s feat by reaching the final on Saturday, having been runner up in the pairs. To do that, he will need to beat Ruben Beloki, a multiple winner whose best days are surely past. Beloki retains his guile and Aimar will not expect a walk in the park in his semi final, but the vast majority of the money will be on him. Irujo-Aimar is the dream final for which many will hope, but whoever joins him there will have their work cut out if they are contain his relentless momentum towards the txapela. 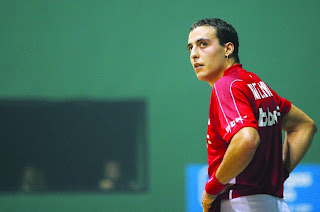 Can Martinez de Irujo be stopped?