Zarautz, which has the longest beach in Euskadi, is renowned more for surfing than pelota but for the past few days, the latter has ruled the town. Four pairs, two each from ASPE and Asegarce, arrived at the seaside for a tournament of great quality, featuring great pelotaris in flying form. Both of the partnerships who contested the final had won their first matches with ease and expectations were high last night for a gripping showdown. Much of the pre match talk was about a duel between Aritz Begino and Aimar Olaizola, both of whom have been scintillatingly good in recent weeks, but in the final analysis, it was the latter that shone, dismantling ruthlessly the game of the former in a show of breathtaking strength and tactical intelligence.

The match started as the fans would have wished; for sixteen points there was no clear favourite as both pairs traded blows. There were slight indications that Aimar’s form might not be holding as he hit low twice in the first three points, clearly disgusted with himself, but the forward battle turned into an enthralling one. Both Aimar and Oinatz took the ball with startling pace and went at each other with remarkable verve in a series of furious volleys. Such was the determination of each to break the other that when Aimar hit a txoko winner at 5-2, both were sprawled on the floor. As they traded winners, both clenched their fists and roared in delight. At this stage, the defenders also appeared much of a muchness. Both committed errors but also returned with aplomb from the back of the fronton. Oier was in part responsible for the ASPE comeback from 6-2 down to 8-6 up as he miscued on three occasions after the time out, which perhaps disrupted his rhythm.

Although Bengoetxea and Begino had all the momentum in the second quarter of the match, affairs were all tied at 8-8 and one sensed the game needed someone to grab it by the horns. It was Aimar, now sliding with ease into a higher gear, who stepped forward. In effect, two almost identical points turned the direction of the game on its head. Aimar is renowned for the brutal strength of his left arm and two successive crosscourt airez winners induced collective gasps from the large crowd; the man from Goizueta meant business. The Asegarce pair surged forward to a 9-8 lead and never gave their opponents a further look in. If the relentless march of Aimar and Oier was started by means of Aimar’s strength, it was maintained chiefly by the same player’s tactical skill. Olaizola has always been singled out as a superb reader of the game and he sensed Begino’s less than solid defence, which he set about exploiting by means of successive long balls and fast, spiralling serves. From 11-10, they won nine points in a row to take the title at a canter. The pressure on Begino, who made a string of errors, seemed to manifest itself in his partner too. Oinatz, in his usual fashion, fought to the death but was clearly rattled by his inability to make any inroads into the score line. While Aimar trapped him and swallowed him up at the front, Oier played the perfect foil, hitting freely and relentlessly. While the eventual victors formed an unbreakable team, the vanquished fell apart; as Aimar and Oier marched to 20-10, neither of their opponents ran for a ball which Aimar nonchalantly swiped into an empty court. Oinatz protested to Begino and the heavens but it was all in vain. Two more Begino errors and that was that.

Pundits and fans alike expected much of Aimar Olaizola here and he delivered on all fronts. The six time major championship winner has now won three titles since his defeat in the Manomanista Final and has beaten his conqueror there, Juan Martinez de Irujo, three times. He must surely wish the Cuatro y Medio Championship would come sooner for in this sort of form, defeat there would be an upset. Oier Mendizabal too is riding the crest of a wave, appearing as solidity personified. Bengoetxea and Begino will doubtless feel downhearted but they have acquitted themselves well. Bengoetxea appears to have cast off much of the ring rustiness of his finger injury and Begino must forget this final and remember his earlier achievements. There is little shame in defeat to a rampant Olaizola II and his brick wall of a partner in crime. 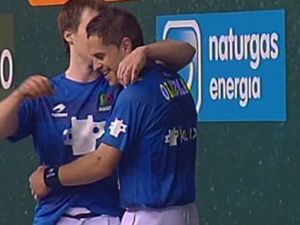 Oier and Aimar: dominant in Zarautz