Last night, Pablo Berasaluze and Aritz Begino became the first pair to progress to the final of the Torneo Cuidad de San Sebastian. The Asegarce pair dominated proceedings at Atano III, defeating Xala and Fernando Goñi by 22 points to 12. The victorious partnership outplayed their rivals both in attack and defence; Begino was especially impressive, showing terrific strength, accuracy and range which put the usually unflappable Goñi in the shade. Berasaluze continued in his recent vein with some stunning forward play and all of the fiery defiance for which he is known. Xala was a contradiction, playing at times with mastery and at times with baffling carelessness, stinging airez winners mixing with too great a number of txapas. The result was never in serious doubt.

The second semi final takes place this evening as follows:

Sadly there will be no webcast.

The first game, a ‘special’ match, of the festivities in San Sebastian was an unusual one, pitting as it did Juan Martinez de Irujo (playing with Titin III) and Aimar Olaizola (playing with Pablo Berasaluze) against each other as defenders. As one might expect, it was an extremely atypical encounter. Neither of the ‘defenders’ seemed terribly keen to play as such with all four pelotaris at times in the front portion of the fronton. This led to a fast and furious encounter with some highly entertaining points. However, Irujo did not appear entertained in any way, shape or form. The Manomanista champion looked like a fish out of water as he made error after error and constantly found himself out of position. Confusion reigned between him and Titin. In contrast, Olaizola and Berasaluze had a ball, perhaps ironically given Aimar’s reputation as a poor back court player in his junior days. They appeared relaxed and worked swimmingly together as a team, resulting in a crushing 22-7 victory. Despite being an encounter of little importance, Aimar will surely have been delighted with yet another score over his old rival this summer. The pair will meet again, rather more conventionally, in a mano a mano game on Saturday. 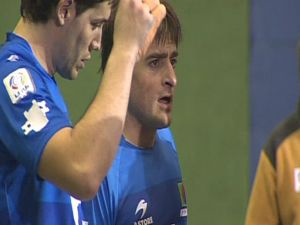