With the dust barely having settled on the Pairs Championship, the Manomanista, the blue riband event of pelota mano, is almost upon us. Indeed, one match has already taken place; on Saturday, Asegarce pelotaris Aritz Begino and Patxi Ruiz competed for the last remaining place in the draw, and encounter won by 2003 champion Ruiz 22-12.

The competition looks radically different in 2010. In past years, previous performance has dictated the point at which certain players have enetered the competition. Lower ranked players have fought their way through preliminary rounds for a chance to face the top players in the last eight. This year however, only eight protagonists will take part, four from each empresa. They will play in two leagues of four, with the top two from each half of the draw advancing to the knockout semi finals. This format rewards the most consistent, and acts as a ‘champions league’ of pelota, which is sure to excite the fans, but it has attracted some criticism for its exclusion of promising young players in search of a major breakthrough. Mikel Beroiz, last year’s Second Tier Manomanista champion, will not, for example, be able to compete in the main draw one year on, as has been the custom in the past.

The players involved are as follows:

Group A will consist of Martinez de Irujo, Barriola, Olaizola I and Bengoetxea VI, while Olaizola II, Patxi Ruiz, Xala and Gonzalez will take each other on in Group B.

Group A begin their tournament this week. On Saturday, Olaizola I plays Bengoetxea VI in Pamplona and on Sunday, defending champion Martinez de Irujo opens his account in Eibar against Barriola. Group B enter the competition next week. For a the full schedule of matches, go here.

I will post broadcast schedules when they become available. 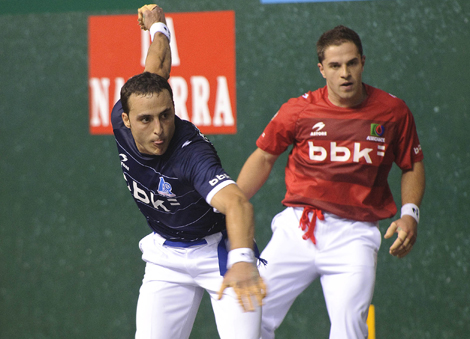 3 thoughts on “Pelotaris ready for battle in new format Manomanista”