To watch, go to https://www.eitb.eus/television/etb-sat/en-directo/

Please note that the final actually takes place earlier in the evening, at around 18:00 (CEST) so if you do not wish to know the result before you watch, stay away from all news sources!

On Sunday night, recent San Fermin winners Oinatz Bengoetxea and Patxi Ruiz confirmed their fine form by taking the second semi final in Zarautz. They will now meet Xala and Beroiz in the final, which takes place tomorrow. The game was tight and fluctuating, with neither side asserting full dominance until the blue team’s final push for the line.

In the early part of the encounter, Berasaluze and Apraiz set the pace as the eventual victors played a game of catch up. An error apiece from the red pair gave Bengoetxea and Patxi their first two points, but they soon found themselves trailing 2-5, courtesy of three winners from Berasaluze and a golden but rather fluky shot from Apraiz, who was also tactically instrumental in his partner’s successes. They clawed their way back to 5-5 however as Apraiz temporarily lost his mojo, going wide and then long, and Bengoetxea, conversely, found his touch. In reaction, Berasaluze and Apraiz surged forwards once more, aided by the latter’s excellent use of the long ball against Patxi. At 5-9 down, Bengoetxea and Patxi gathered themselves again and once more achieved parity, this time at 10-10. Bengoetxea showed his class here, probing the gaps, serving with verve and dominating his forward opponent. He almost took the next point with an opportunist flick into space out wide, but it missed the line, and Berasaluze hit home his newfound advantage with a gantxo winner.

At this juncture, the balance of power turned; Bengoetxea and Patxi again reacted to the points deficit but this time drew level and kept going, turning 10-12 into 16-12. Bengoetxea followed his third service winner with a gantxo, and also wrong footed Berasaluze with a tap into the corner, showing the full range of his skill. The difference between the defenders became more apparent in this second phase of the game, with Patxi ever more secure and Apraiz leaking more points than was ideal. The latter boosted his flagging spirit with an excellent rebote to bring the gap back down to two, and when Patxi struck high in the next point there was renewed hope for the reds, now only 16-17 down. A miscued service return from Bengoetxea brought the match back to level pegging once again however, and this time, when the blue couple seized control there was no looking back. Bengoetxea raised his game to a new level, with two uncompromising winners into the corner, followed by a service winner, before Berasaluze, perhaps sensing that the die was cast, misjudged a ball from close range.

Neither pair looked wholly comfortable, and although there were myriad long rallies, neither forward looked to have the flow of which they are capable. Bengoetxea and Berasaluze managed eleven winners apiece, but the former was the more consistent, and the more astute. Apraiz was at times impressive, and often played the long ball with aplomb, but he lacked the dogged consistency of Patxi, making six errors to his opponent’s two. The victors can and will up their game in tomorrow’s final, where Xala and Beroiz will present a significantly greater challenge. 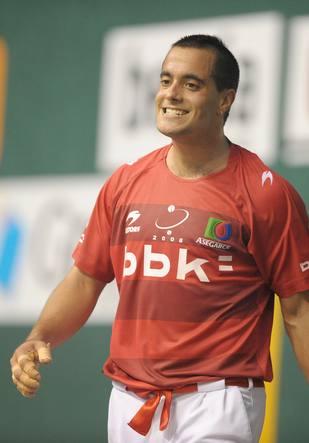