The Navarre-Rioja partnership of Juan Martinez de Irujo and David Merino kept alive their hopes of a semi final slot with a fine victory over Oinatz Bengoetxea and Ibai Zabala, the latter a substitute for the injured Patxi Ruiz. The victors took advantage of the presence of Zabala, who tried gamely to fill Patxi’s shoes, but proved the weak link under a relentless aerial bombardment. Irujo and Merino took an early lead at 12-7, but Bengoetxea took the game to the former and pulled his pair level at 14-14, momentarily making up for the disparity between Merino and Zabala to his rear. However, he could not hold the fort indefinitely, and the pressure of the red pair’s perfectly executed tactic became too much to withstand; they added eight points to only one in reply to take the match without breaking sweat. They now lie 6th, level on points with Bengoetxea and Ruiz, who sit 4th.

Ekaitz Saralegi, replacing the injured Asier Olaizola, and Ruben Beloki presented no problems whatsoever for pre-tournament favourites Yves Salaberry and Abel Barriola. There was little Saralegi could do in the face of the pressure of Xala, who asserted pressure without any stress, physical or otherwise. The hapless forward, who committed six errors, blamed his lack of time in the tournament for his rustiness, but whatever the reason, there was no mistaking his inferiority here. Beloki was notably ineffectual, and rarely moved the ball with any invention. There was no comparison between him and Barriola, who rarely needed to extend himself and barely put a foot wrong. As befitted their play, these two pairs stand as polar opposites in the table; Xala and Barriola are level on wins with Olaizola II and Begino but now go top by virtue of points difference. Saralegi and Beloki are tailed off at the bottom, with little hope of rescue. 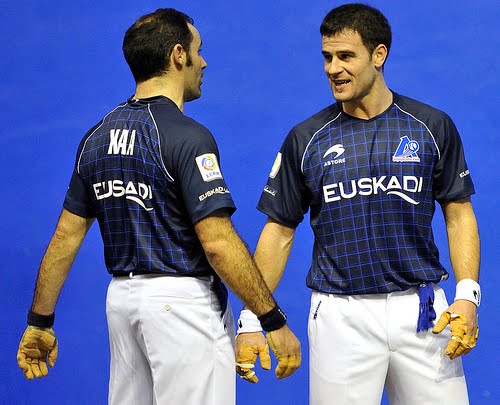